The brief calls on Los Angeles-based architects to create conceptual buildings based on the story behind the sports brand's recently launched P.O.D.System shoe.

Allsbrook describes P.O.D.Plexus as "a modular system of structures, paths and spaces that hover slightly above the landscape".

The system comprises areas of open space and vaulted pods, which theoretically could be assembled to form sprawling elevated structures above any kind of terrain.

Kuhle and Allsbrook based the P.O.D.Plexus concept on the modular aspect of adidas' shoe, which features a distinctive outsole made up of three distinct modular components designed to offer shock absorption and stability to runners.

"When we first got the brief for this project, the name P.O.D.System was interesting to us, and the idea that it was a modular shoe," explains Allsbrook in the movie, which Dezeen filmed in Los Angeles.

The architects looked to modernist ideas from the 1960s to create a structure composed of modular pods. "A megastructure is a sixties kind of concept, where you would take multiple pods and then you would assemble them in a larger whole," Allsbrook explains.

Kuhle claims that the proposal merges an unusual pairing of architectural forms. "We wanted to combine two architectural elements and strategies that are never usually together," she says. "One of them is the vault, which is an enclosed structure which usually has solid walls on both sides and a vaulted ceiling above".

"The other is transparency, which is basically emptiness," she continues. In P.O.D.Plexus, this takes the form of rectangular volumes cut from configurations of vaulted pods.

"We imagined we had rectangular shapes which we used to punch holes into the vaults," Kuhle explains. "But we were always mindful that we wouldn't completely destroy the vault shape. It was important to us that we never cut away from both ends of the vaults, only from the centre." 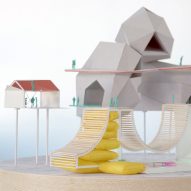 Allsbrook emphasises the versatility of the proposal. "What became interesting to us was the idea that you could put it in any context," he says. "So it could be a house in the desert, it could be an island resort, or it could be a colony on Mars. And it would give you a new perspective on the landscape, just by putting this structure there."

The sketches produced by the architects depict P.O.D.Plexus in a variety of colourful earthbound and interplanetary contexts. "The images that adidas sent us of the shoe were very graphically interesting," Allsbrook says. "That inspired us to look to the landscape as kind of a graphic landscape."

P.O.D.Plexus is the third P.O.D.System Architecture concept to be revealed. It follows a proposal for a park designed to bring different activities together by Design, Bitches, and a spherical live-work complex from Neil Denari.