This small sex toy has grooves on either side of its silicone bulb, for fingers to grip onto while providing clitoral stimulation.

The round device features a band that slips over the fore and middle fingers like a ring, securing it between the two digits.

A ridge runs along the back of bulbous portion, with slots either side for fingers to grip. The front has two different edges – a flat and squishy end, and a soft-yet-firm pointed tip – to provide a variety of sensations.

Fin can either be used directly against the body, or flipped onto the back of the fingers to add a lighter vibration during stimulation. 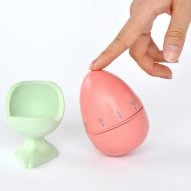 Ten of the most forward-thinking designs created for women

"Fin was meant to basically amplify the motions of the fingers and hand, and fit into routines in a really natural way," said Fine.

The small size and simple shape are both intended to subtly enhance intimate moments, without causing awkward interference.

"When it came to finger vibrators, they were either clunky or involved many wires and chords," said Fine. "Fin was a simple solution to an already desired functionality."

With backgrounds in product design, relationship counselling and sex therapy, the duo aimed to create a wearable toy that could be used by couples as well as individuals. The design process involved both focus-group consultations and scientific research.

"It was inspired by the notion that – based on our research – people want technology to fit seamlessly into the bedroom," said Fine. "They don't want something that is intrusive or awkward, but something instead that amplifies natural touch in an intuitive way."

Fin is made of medical-grade silicone, available in navy or mint green. The on-off button is used to switch between light, medium and intense pulsing speeds, and the finger band is removable if not preferred.

The product is water-resistant and rechargeable via a knitted USB cord, and comes with a small drawstring bag for storing when not in use.

Photography is by Dame Products.