Syrian designer Yamen Saraiji has designed a wearable, two-armed robot that acts as an extension to the human body.

Created during Saraiji's PhD studies at Keio University Graduate School of Media Design in Japan, Fusion is a robot that can be worn like a backpack, giving the wearer use of two additional, remotely operated arms.

The arms are manoeuvred by a distant second user wearing an Oculus Rift virtual-reality headset and operating the platform's handheld Touch controllers.

The robot's "head", which peers over the shoulder of the user wearing it, has two cameras for eyes, capturing a live feed that is streamed to the operator.

Saraiji believes the invention could be useful in situations where people want to give instruction or collaborate remotely.

"Effective communication is a key factor in social and professional contexts which involve sharing the skills and actions of more than one person," says a video produced about Fusion. "However, sometimes it's difficult to cooperate from a different point of view in remote situations, when the participants are physically separated."

"Fusion enables two people to share the same point of view, with the capacity to reproduce the body motion of an operator into the surrogate." 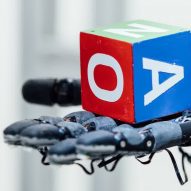 In another configuration, the robot's hands are swapped for wristbands, connecting Fusion to the wearer at the arm. This allows the remote operator to directly guide the wearer's motions.

The backpack-like case contains the battery and CPU.

Fusion is a successor to Saraiji's earlier work, MetaLimbs, which featured arms controlled via foot movements. MetaLimbs was on show at the 2018 Siggraph conference on computer graphics and interactive techniques in Vancouver from 12 to 16 August. There, attendees could test out the prototype for themselves.