With the Dezeen Awards ceremony just five days away, the master jury discusses how this year's interiors shortlist shows how social media is affecting the spaces designers create.

Interior design is becoming more accessible thanks to social media, she added. "Social media is actually a huge part of what we do, and [it] grants availability and accessibility to design," she said.

Her comments echo statements by architect Farshid Moussavi, who earlier this year revealed that clients are increasingly asking her to integrate features that people will snap for Instagram in her projects.

The phenomenon of the Instagrammable moment has now become so widespread that Australian studio Vale Architects has created a guide showing other architects how to do it.

"What resonates with me at the moment is how society is being changed by smart phones and technical innovations in communication," Brinkworth said. "A lot of what's happening is that people are better connected but they aren’t having as close as relationships anymore so actually more people are less connected." 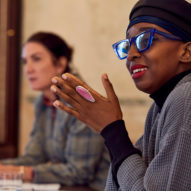 Brinkworth added that the challenge for interior designers and architects is to create spaces that connect people.

"In terms of architecture and interior spaces, it's going to be very important to bring people back together for those physical relationships in a more meaningful, closer space," he said.

Seah pointed out that interior designers today need to strive to create spaces that seamlessly link the physical and digital realms.

"Technology is becoming so much more integrated and seamlessly part of our lives, and so the spaces around us need to take cues from that," he said.

"Either to ground us more so that we feel more part of the physical realm, or to transform us so that the overlap between what is digital and artificial, and what is real and physical merge and create a new kind of hybrid experience," Seah added.

Ahn reflected on a set of questions about what it means to inhabit physical space during a time of technological advancements, which can be seen in the design industry today.

"At this time what does it mean to be human?" he asked. "What distinguishes us from machine? What do we want to get from the physical world and the natural world and from what we create? And that manifests in design".

Moroso stated that designers should pay attention to how the world and humanity evolves in order to make design more democratic.

"I think we have to be conscious that we're producing objects and things for a contemporary world, so we have to pay attention to how the world is changing," she stated. "Humanity is a fantastic and diverse group of people, and we are making things for the many and not for one idea only."

The interiors master jury, together with the juries for architecture and design, met at Ennismore Sessions House in London on 8 October to decide winners for all 33 awards categories.

Dezeen Awards winners will be unveiled on 27 November at a dazzling ceremony hosted by British comedian Sir Lenny Henry. Each winner will receive a hand-made trophy designed by Atelier NL.

A panel of 75 judges assessed every entry online, whittling them down to a shortlist of five entries per category, with winners emerging based on a scoring system.