The shutdown of London's Gatwick Airport highlights the weakness of existing measures to protect vital infrastructure against drone attacks, according to designers and experts.

As the airport in southern England reopened to flights this morning after a 36-hour runway closure, key figures expressed alarm at the ease with which the unmanned aerial vehicle (UAV) was able to cause disruption.

Drone specialist and architect Liam Young told Dezeen the incident highlighted how legislation had failed to keep up with drone technology.

"It's a perfect example of how technology evolves at a much faster pace than culture does," said Young, whose work with UAVs includes the City of Drones project and the feature film In the Robot Skies, which was shot entirely using drones.

"Five years after drones become mainstream and affordable we are running around trying to figure out how to regulate them," said Young, who earlier this year told Dezeen that drones could prove to be as "disruptive as the internet".

He added: "I suspect it is some kind of protest or frustration directed at the airline industry, perhaps focused around the environmental cost of flights, noise pollution or a screwed-over passenger."

"I fear that the lesson from the Gatwick drone fiasco is not that we need more counter-drone deployment, but rather that current counter-drone products don't work where the drone is bespoke, thousands of feet away and moving fast," he tweeted.

He added that it would be "even worse" if the drone was autonomous and therefore not dependent on a human operator.

Incident "underscores the need for systems"

DJI, the world's largest manufacturer of commercial drones, said the Gatwick incident "underscores the need for systems to help enforce the laws against deliberate misuse of drones."

It called on aviation authorities to adopt stronger measures to counter the disruptive threat of drones.

"Aviation authorities should strongly consider several steps to help build a modern framework for managing the potential for drone interference," DJI said in a statement.

"This includes mandatory 'Remote ID' systems to identify and monitor airborne drones, which require all drones to transmit the location of the drone and its pilot in real time, as well as an identification code," DJI said.

"Governments should also consider authorizing systems to directly counteract drones in extreme situations, with appropriate precautions to ensure it can be done safely and responsibly."

Earlier this year the brand told Dezeen it has "limited ability" to prevent people from using its products for malevolent purposes.

"While we build some prudent safety and security features into our products, we have limited ability to control what people do with them," it said, following the attempted assassination of Venezuelan president Nicolás Maduro using two DJI drones carrying explosives.

"As with any technology, if people decide to misuse our products in any way, they have to be responsible for their actions."

The Chinese company revealed that it had offered assistance to the British authorities in relation to the Gatwick incident.

It said: "While DJI has no independent confirmation of what has occurred or what type of drone may be involved, the company is prepared to offer technical assistance and comply with appropriate requests from law enforcement and aviation regulation officials."

Cause of Gatwick incident still unknown

The cause of the Gatwick incident remains unknown, as does the reason why the airport was reopened for flights despite the lack of any arrests.

Observers pointed out that a single drone would need to be recharged multiple times to cause disruption over such an extended period, since battery life of commercially available drones averages between 20 and 30 minutes. Others noted the absence of details about the type of drone or footage of the device.

Authorities appear to have been hampered in their attempts to deal with the incident by fears that intercepting or shooting the drone could be illegal or have unforeseen consequences. Gatwick Airport's chief executive Chris Woodroofe admitted that there was little the airport could do to eliminate the threat.

“We have been working with technology providers ourselves for the last 12 months but stood here today, there is no commercially available airport licensed proven technology that I could implement,” he said, according to The Guardian. 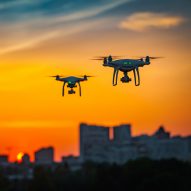 The British Army is understood to have deployed a counter-unmanned aircraft system (C-UAS) called Drone Guard at Gatwick, allowing the runways to reopen.

The Drone Guard system, developed by Israeli firm Rafael, was purchased by the army this summer. It provides an “end-to-end system designed to provide effective airspace defence against hostile drones used by terrorists to perform aerial attacks, collect intelligence, and other intimidating activities”.

Drone filming service Crowded Space Drones tweeted that it was helping the UK authorities, but declined to give details.

"We can confirm we are deploying assets around the UK to support protection of the travelling public at airports and other facilities as they start Christmas travel," it said. "We will not be commenting further at this time."

Perpetrator "really could be anybody"

Young said that "anyone" could be behind the incident.

"Drones are now so accessible that it really could be anybody from 13-year-old kid out for a holiday laugh to a 70 year-old old disgruntled resident sick of aircraft noise," he said.

"Getting into the air used to come with extraordinary cost and privilege, but now the technology has been democratised to an extend that it is in the hands of everyone," he added. "This is a massive shift in the power structure."

"You'd think someone is doing this remotely and is nowhere near Gatwick," he said. "The only way to evade [security measures] is to not have any connection to the operator."

He added: "The timing suggests somebody is trying to maximise the impact. The people doing this are exposing the loophole. They're doing dramatic minimally invasive infrastructural damage on a low budget."

Earlier this year Elevation, Dezeen's short documentary about the future impact of drones, predicted that the devices could start to be used for nefarious means.

In the film, Weisshaar warned of "scary" scenarios where drones could be used to cause harm.

"It's surprising how little has happened with commercially available drones... Because there is stuff that can carry considerable payloads," he said.

"Just dropping things into a crowd is a real option. And gladly nothing has happened there yet, but it will."

The disruption at Gatwick Airport caused the cancellation of around 800 flights, affecting 120,000 people. New UK laws were introduced this summer making it illegal to fly drones within 1,000 metres of an airport.