Later this year, West Elm will begin stocking products in-store and online from the range currently produced by Good Thing – a brand started in by Canadian designer Jamie Wolfond in 2014.

"This ride has been very exciting, full of both challenging and triumphant moments, this certainly among them," Wolfond told Dezeen. "It is a very major change, but an exciting one for me!"

The brand will remain an independent entity, and Wolfond will continue to create products under his eponymous studio. He will also work with West Elm's creative team to develop new products, which will be introduced seasonally.

"Working with a larger company provides a new opportunity," Wolfond said. "For a long time, I resisted learning how things are conventionally done in the industry... I don't regret it for a minute, but after four and a half years, I am looking forward to bringing some more conventional wisdom to the table." 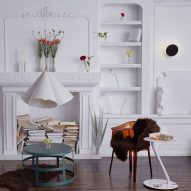 Over the years, Good Thing has launched a large body of designs, ranging from small accessories to larger furniture pieces.

Other key Good Thing products include an umbrella holder, a set of dustpans and trays with crinkled edges, and a no-frills translucent bar of body soap designed by Jasper Morrison.

"It seems I have a good deal of pent up creative energy from having split myself between design and running a business over the last several years, and the ability to focus primarily on making beautiful work is really a special opportunity," Wolfond said.

Other small design companies to be taken on by larger companies include electric bike-sharing service Jump, which was acquired by Uber; and Italian studio Discipline, which was absorbed into Swedish furniture company Hem.

Photography is by Robin Stein and Margaret Jones.