A housing block by architecture studio Farrells, currently under construction in west London, is aiming to be the first housing in the city to accept delivery of packages by drone.

Although commercial drone deliveries are not yet happening in London, developer Almacantar wants Lyons Place to be able to take advantage of the technology as soon as possible.

Scheduled to complete in June, the 76-home development will incorporate a landing area for drone deliveries, operated by drone-infrastructure company Skyports.

The landing platform will be located in the centre of the roof on Lyons Place's main housing block. Skyports has agreed to lease the space for the platform – or vertiport – from the developer, and will operate and maintain the landing area.

The system will allow residents to have deliveries delivered directly by drones as soon as this service is available in London.

"Tenants living at Lyons Place, by the click of a finger, will be able to order items from the comfort of their homes through the internet, which is then delivered by a drone landing on the roof," said Ade Awoye, senior architect at Farrells.

"The concierge is then notified of the parcels arrival and collects the item to be hand delivered to the tenant's front door," he told Dezeen.

Drone ports "will become the norm"

Farrells incorporated the drone port so as to anticipate the needs of the future residents and their desire to be connected with the city. The studio believes that facilities for drone deliveries will need to be incorporated in most urban projects moving forward. 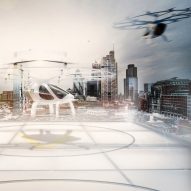 "We are adapting to technological trends and the increase in consumer goods purchasing that is starting to shape the urban cities we live in," continued Awoye.

"This is a new level of connectivity within the urban city and we believe this will become the norm in the near future."

This view is shared by the drone-infrastructure company Skyports. In a recent interview with Dezeen, Duncan Walker, the company's managing director, said that "vertiports" will be as common bike facilities in the future.

The idea is in line with some the ideas proposed in the Dezeen documentary Elevation, which suggested that the use of drones will transform the way buildings are designed and the ways cities function.

Skyports is currently acquiring rooftop spaces across London. It already has the rights to 15 rooftops in the city, with Lyons Place the first in line to accept drone deliveries once they start happening.

"Lyons Place is an early adopter of this new technology. There are still a couple of hurdles to clear, but Lyons Place is at the front of the queue for first flights," Jeannie Pritchard infrastructure manager told Dezeen.

"Future-proofing the scheme in this way secures this location for drone operations. We believe that many buildings will have Vertiports in the not-too-distant future."

10 ways drones are changing the world

Along with the port at Lyons Place, Almacantar confirmed that drone delivery facilities will be considered for each of future developments. It is currently working to incorporate a drone delivery port at its Marble Arch Place development.