Today's Google Doodle celebrates the centenary of the founding of influential German design school the Bauhaus.

Google launched the doodle to mark the school's founding in Weimar, Germany under Walter Gropius in April 1919. The doodle appeared today, 12 April, but the exact date the school opened its doors remains unknown.

Dezeen has also marked the anniversary with the release of an A-to-Z Bauhaus guide.

Featured on the search engine's homepage, the graphic comprises the word Google in rigid, boxy letters with black line drawings and a rounded "O" at the centre. Blocks of yellow, green, red, blue, black and white are heavily incorporated.

Doodle "celebrates the legacy" of the Bauhaus

Google Doodles are temporary alterations to the search engine's logo, released to coincide with events and anniversaries.

Previous doodles have marked Zaha Hadid becoming the first woman to win the Pritzker Prize and the centenary of the birth of urbanist Jane Jacobs.

Today's doodle celebrates the opening of the Bauhaus, which existed for 14 years before being forced to close for political reasons with the rise of the Nazi regime.

Bauhaus architecture and design from A to Z

The scrolling animation features objects presented against a cobalt blue background. Illustrations include a grey rectangular building – resembling the Bauhaus school building in Dessau – chair, a lamp and other homeware and graphic items.

"Today's animated Doodle celebrates the legacy of this institution and the worldwide movement it began, which transformed the arts by applying the principle 'form follows function'," said Google in a press release.

"Both a school for the arts and a school of thought, the Bauhaus was founded by architect Walter Gropius exactly 100 years ago in Weimar, Germany, gathering many of Europe's most brilliant artists and designers with the aim of training a new generation of creatives to reinvent the world," Google said. 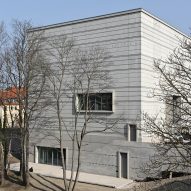 A wide range of studies was taught at the Bauhaus, including colour theory, fine art, photography, performance art and industrial design. Architecture came later, under the school's second and "unknown" director Hannes Meyer.

"Students of the Bauhaus received interdisciplinary instruction in carpentry, metal, pottery, stained glass, wall painting, weaving, graphics, and typography, learning to infuse even the simplest functional objects (like the ones seen in today's Doodle) with the highest artistic aspirations," said Google.

Textiles were studied predominantly by female students, who were discouraged from most other studies. Key practitioners include Anni Albers, Gunta Stölzl, Gertrud Arndt and Grete Reichardt.

After being founded in Weimar in 1919, the Bauhaus school moved to Dessau in 1925 and stayed there until 1932. Gropius led the institute as its director until 1928. He was followed by Meyer and then Ludwig Mies van der Rohe, who ran the school from 1930 until 1933, when it moved briefly to Berlin before closing for good.