Adidas has launched a sneaker made from virgin plastic that can be ground up and remade again, as part of the company's bid to mitigate the plastic crisis.

The Futurecraft Loop shoe was launched 17 April by Adidas as a first step for the brand to help "get off plastic waste".

The aim was to create a product that could be recycled as part of a closed-loop system.

To do this, Adidas developed a high-performance running shoe made completely from a single material, virgin thermoplastic polyurethane (TPU).

This single material is the key to its recyclability. One of the biggest challenges in recycling sneakers is that they are made of many different materials, which are difficult to separate, sort and repurpose.

"That's a problem because you can't recycle 12 to 15 materials in one recycling area," said Adidas executive board member Eric Liedtke at the event.

"You'd have to recycle each of them individually in 12 to 15 different ways, and figure out the decomposition to take apart the shoe and figure out how to get those materials onto the recycling area," Liedtke added.

The Futurecraft Loop sneaker comprises a knitted upper and an Adidas patented Boost foam sole, all made from TPU. A torsion bar is revealed at the bottom in a hollow area.

The different TPU components are fused together with heat, which dramatically changes the plastic's form and texture. It also means that no glue is used for any of the construction.

The product was created with technology that Adidas has developed in the last six years – the heat system was unveiled at last year's Futurecraft shoe launch. 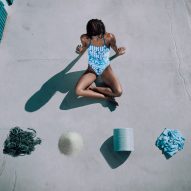 Futurecraft Loop is currently in beta phase and a select group of 200 users are trialling the sneakers and will send it back to Adidias in a few weeks.

With this, Adidas claims there will be zero waste and nothing thrown away.

Adidas is asking the group to run in the shoe and use it roughly, and share feedback on their experience. Each pair comes with a QR code to gather results that will be used to shape the roadmap for the wider release of the smart programme.

Adidas introduced the circular strategy at the launch this week. The brand developed the design in a bid to help to mitigate ocean plastic pollution, which is a huge concern for environmentalists.

"Plastic is our biggest problem," Liedtke said at the event.

Adidas' collaboration with Parley for the Oceans is among the most well-known responses to the problem. Products in the series include trainers made from recycled plastic and swimwear made from upcycled fishing nets and debris. 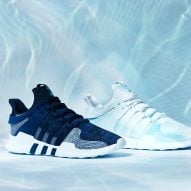 This year, Adidas plans to produce 11 million pairs of shoes with Ocean Plastic by Parley, by intercepting plastic waste on beaches. The sports brand also proposes to use only recycled polyester in every product in the future, and on every application where a solution exists.

By 2024, it hopes to come off virgin polyester altogether and be based predominantly on recycled materials as part of its sustainability strategy.

Futurecraft Loop is an option for sustainability but not the final solution, the brand is keen to state.

"This is a milestone not only for our brand, but for our industry and way of life as a human being on this planet," Liedtke said. "It wasn't easy [getting here]."

"Finding recyclers who were willing to work with us was a challenge," materials engineer at Adidas Tanyaradzwa Sahanga told Dezeen at the event.

She added that anyone can make a shoe out of recycled materials, but Futurecraft Loop is Adidas' first test at a closed-loop creation process.

Closed loop design, which is a key component of the circular economy, is based on sharing, leasing, reuse and repair. It is aimed at minimising waste through recycling, to make the most of the materials at all stages of production and completion.

Futurecraft Loop is a way for Adidas to be engaged in a closed-loop recycling programme. The brand is starting with virgin plastic, rather than recycled, so they have full control over the material and processes.

The breakthrough is planned to be Adidas' future business model.

As of now only a small portion, approximately five per cent, of the recycled elements can be used to make the second version of the sneaker, meaning that more virgin plastic must be used for the next edition. Adidas hopes to hone this craft quickly.

In spring 2021, it will launch a version of the plastic shoe to the public, along with its recycling programme. For now, a lot of development still must be done.

"Futurecraft is very much a statement of intent," said Paul Gaudio, Adidas senior vice president of creative direction. "What we'd like to do here is open up the innovation process."

Some of the problems Adidas is facing are learning how to make the product, as well as finessing the return and upcycling processes, including aspects like membership and collection.

"We're not done, we could wait, we could keep this in the lab until it's perfect and then do a big tada," Gaudio continued. "But what we prefer to do is open up the process our consumers and industrial partners and whoever is interested to help us solve the problems that are ahead of us."