Eight miles of mirror-polished steel trim creates a glistening finish inside Bob Bob Cité, a maximalist French restaurant in the City of London designed by BradyWilliams.

It is suspended 30 metres above the atrium in the Leadenhall building designed by architecture firm Rogers Stirk Harbour + Partners.

"The ultimate goal was to create something quirky, eccentric and memorable that didn't conform to typical thinking," Brady told Dezeen.

Reminiscent of a superyacht or a luxurious early-20th-century Zeppelin airship, the restaurant features railway-carriage booths that have been given a futuristic twist. 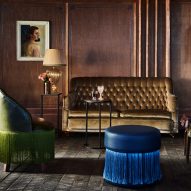 The walls of the main dining room are covered with Japanese book-binding paper accented with the mirror-polished steel trim. The trim weighs over five-and-a-half tons and is held in place by 48,000 hand-polished 'snake eye' bolts.

"The weight of these bolts alone is such that a separate structural assessment had to be undertaken to ensure that the floor plate could support the load," said Brady.

Shutov's love of primary colours influenced the bold red and blue palette of the main dining room, complementing the existing yellow in the building's architecture.

The restaurant boasts three private dining rooms, each with a personal reception area that guests can use for pre-dinner drinks.

Rosewood marquetry panelling on walls and ceilings throughout the various dining spaces was crafted off-site and installed as complete pieces, for a precise finish.

The original Bob Bob Ricard restaurant includes a "Press for Champagne" button on each table, a feature that has become popular with diners posting on Instagram. It has been incorporated into the design here – this time in French.

When 'Pressez pour le Champagne' is activated, the table number appears on a ticker tape that wraps both the interior and the facade of the restaurant – a reference to its location in London's financial district.

BradyWilliams is a London-based studio founded by Shayne Brady and Emily Williams. The studio specialises in commercial and residential projects that are designed to be timeless yet memorable.

Maximalism and opulent decor has become a popular trend in restaurant and bar design lately, as seen in this pan-Asian brasserie in Montreal and this dining venue in Sydney.