Kooo Architects has converted a seven-storey building in the centre of Guangzhou, China into a guesthouse with lantern-like frosted glass walls.

Hotel Far & Near Nanhao St sits in a dense residential area of the city.

"Due to the high density of buildings and their close distance between each other, one can see the clothes drying on the neighbour's balcony through the windows," said the studio.

"How to allow the visitors of the guesthouse to not have this kind of visual interruption while enjoying abundant natural light became one of the major problems we had to solve."

Kooo Architects stripped the original structure back to its bare concrete frame and added industrial-style frosted channel glass, U-shaped glass that can be used to make uninterrupted walls of glazing.

This type of glazing floods rooms with natural light while protecting guest's privacy from the overlooking by neighbouring residential buildings.

These large sections of channel glass also turn Hotel Far & Near Nanhao St – which stands taller than most of its neighbours –  into a beacon when it is dark.

The channel glass even acts an insulation layer, helping to maintain consistent temperatures in the rooms in Guangzhou's subtropical climate.

Each floor has been designed with four-room layout, each with a double-height living room.

A mezzanine bedroom area, reached via a ladder, sits above a wet room with a toilet and shower.

The exposed concrete frame contrasts with the living spaces lined in wood and the metal-clad bathrooms.

Large white curtains can be drawn across the glazed walls for privacy or darkness.

At ground floor level, the back wall of Hotel Far & Near Nanhao St's lobby has been lined with a perforated steel sheet. 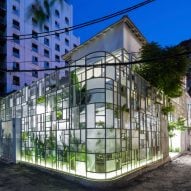 The perforation casts a pattern of light and shadow across the entrance and the section of steel decking that line the ceilings.

This rough, industrial feel is continued by the lobby's brown paving, which makes the space look like a continuation of the streets outside.

At the top of the building, rooftop terrace with wooden decking overlooks the city through a screen of metal poles, arranged to allow climbing plants to grow upwards.

Kooo Architects was founded by Shinya Kojima and Ayaka Kojima and has offices in Tokyo and Shanghai,

Previous projects by the practice include a café in China with a dramatic latticed wooden ceiling.

Photography is by Keishin Horikoshi.