The studio won the competition to design the school, which sits alongside a 1920s nursery close to Zarren's town centre, in 2014.

Classrooms sit in the western wing, directed towards the playground, which features curving pink benches.

In the northern wing more public functions such as a cafeteria and sports hall face out towards the open square and the town beyond.

Two large metal doors in the end of the single-covered northern wing allow the sports hall to be opened out to the playground.

The exteriors reference and subtly elevate those used in the surrounding structures in the town. Familiar materials such as brickwork are mixed with with pink concrete and fibre-cement shingles.

"The facades mimic, in a collage-like way, the somewhat unremarkable materials of the surrounding houses," explained the studio. "The ceramic roof tiles are subtly lined by a playful serrated roof trim."

Organised into two wings set at a right angel, the school's layout maximises the playground space in the centre, which extends into a public square.

A sculptural, pink concrete staircase sits where the two wings meet and leads up to the second storey, connecting the classroom corridor to the cafe and sports hall. 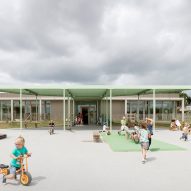 The pink continues in the floor plate of this communal area, colouring to both the ceiling below and the floor above.

Big windows, high ceilings and the use of bold colours create bright interiors.

Classrooms are lined with pale woo and large glass partitions separate the classrooms and corridors.

"The overall ambition was to create a light, transparent and homely atmosphere throughout the whole school," explained the studio.

Felt was founded in 2014 by Jasper Stevens and Karel Verstraeten, having both studied at the University of Ghent.

Other architecturally interesting schools in Belgium include a primary school clad with glazed green bricks in Boom by Areal Architecten, and a pyramidal-roofed school in Knokke-Heist by NL Architects.