Studio Tom Emerson and Taller 5, Mediated Matter Group at MIT and Branch Studio Architects have won awards for the best projects of the year at Dezeen Awards 2019.

The announcements were made in front of 250 guests at Ennismore Sessions House in London, where the best established and emerging studios of the year were also revealed.

The overall winners across the sectors of architecture, interiors and design were chosen from the thirty winning projects, which were announced earlier this month.

A shelter for archeologists in Peru, a school office interior in Melbourne based on Italian piazzas and a robotically fabricated structure made from organic matter were selected as this year's overall project winners.

This year's three master juries, who met in London in September, chose the winners based on how beautiful, innovative and beneficial they are to people and planet.

The architecture project of the year, which also won the small building award, was designed and built by 45 architecture students from Zurich and Lima.

The pavilion provides shelter for archaeologists in Pachacamac, an archaeological site in Peru that covers around 600 hectares of desert.

The open rectangular structure was designed so that the archeologists' examinations of artefacts are in view of passing visitors and children from a nearby school.

The architecture master jury, which consisted of Sou Fujimoto, Lyndon Neri, Kunlé Adeyemi, Sonali Rastogi and Jing Liu, championed the project for its structural preservation and the characteristics of the space.

"This project is a perfect response to an old structure," said the judges. "The introduction of softer elements creates a surprising and pleasant atmosphere."

Piazza Dell'Ufficio by Branch Studio Architects has been named interior design project of the year. The project involves the redesign of executive administration offices of a college in Melbourne. 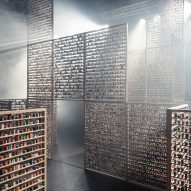 Almost every surface of Piazza Dell'Ufficio, which was also named small workspace interior of the year, has been lined with slim cardboard tubes.

The Australian architecture studio wanted to create an environment that broke down barriers between staff and student interactions.

"There is a great balance between contemporary, recyclable and affordable materials and colours, creating a warm and calming environment that is suitable for student welfare," the judges added.

Aguahoja I is a digitally designed and robotically fabricated structure made using the molecular components found in tree branches, insect exoskeletons and human bones.

Standing five meters tall, the structure's flexible bio-composite skin is composed of cellulose, chitosan and pectin, examining how even the materials that we consider waste can inform design.

The project by Neri Oxman's research and design group, which also the won the award for sustainable design, demonstrates the application of water-based robotic fabrication at a scale close to those of natural ecologies.

"Finding new sustainable materials is an urgent matter," said the design judges. "Aguahoja I shows how nature can help us to design new materials, highlighting the relationship between nature and technology."

"It is completely innovative and presents hope for the future," they added. "The organic material shows huge potential, which could change even how we think about architecture."

Each winner was presented with a hand-made trophy designed by Atelier NL. All of the category winners were revealed earlier this year.