Kazunori Fujimoto Architects & Associates used corner windows for a concrete house with views of the sea and Itsukushima Shrine in Japan's Hiroshima prefecture.

House in Ajina is built atop a steep slope, resulting in uninterrupted vistas to the Seto Inland Sea with an internal layout that accommodates the change in levels.

Bedrooms are on the ground and second floors, with the main living spaces slotted in between them on the first floor.

Entry to House in Ajina is via an open-plan kitchen and living space, which is more than four metres above the bedroom below.

In the kitchen, striped glazing in the corners of the double-height ceiling bring in natural daylight, whilst other large rectangular windows in the room frame views of the sea.

Itsukushima island, also called Miyajima, is famous for the torii gates of the shrine, which look as if they are floating in the water off shore. From the house, residents are able to enjoy a unique view of both the island and shrine. 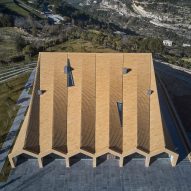 House of Many Vaults "kneels down" towards shrine in Lebanese mountains

"The main intention was to create a house that faces the Itsukushima Shrine in the most dignified and modest way with respect," said the studio.

The master bedroom is found on the ground floor, below the living and kitchen.

Kazunori Fujimoto Architects intentionally kept the stairwell narrow and dark, in order to emphasise the different ceiling heights of the three floors.

"Sequences like this that descend underground give us more consciousness about the richness of a tranquil space," the studio said.

The architects looked to the style of de Stijl, the Dutch art movement that practiced abstraction of forms reduced to rectangular planes, to disassemble the traditional box house into its fundamental shapes.

House in Anja's simple interiors allow residents to focus on the relaxing atmosphere of the Seto Inland Sea.

A balcony extends towards the sea view on the house's south facade.

Adjacent to the balcony, one side of the exterior wall is offset from the facade by 600 millimetres, appearing to hover in front.

Kazunori Fujimoto Architect & Associates, which was founded in 1998, has recently completed a home in Ashiya with a delicate curved staircase.

CAPD also designed a minimal house in Tokushima with views of the sea, and Gosize built a concrete house in Hyōgo with multiple openings that frame views of an internal courtyard.

Photography is by Kazunori Fujimoto.