The project, called Dillon617, is located in LA's Silver Lake neighbourhood, which has undergone a dramatic transformation in recent years.

Once a "sleepy Eastside enclave", as described by local firm Lorcan O'Herlihy Architects (LOHA), the area is now filled with boutiques, coffee shops and restaurants that have enlivened the atmosphere.

Despite this evolution, the housing stock has remained mostly unchanged since the 1970s, according to LOHA. Residential streets tend to be dominated by low-scale housing, including single-family homes, duplexes and fourplexes.

"There is a need for much more density – not only to keep up with demand, but also to retain a level of affordability in a housing market that has priced-out the majority of artists and ethnic communities responsible for giving the area its unique flair," the firm said.

In response, LOHA has designed a 72,000-square-foot (6,689-square-metre) residential building that contains 49 units, ranging from studios to three-bedroom apartments.

Occupying a rectangular parcel, the building consists of two long bars that are placed side by side. Running between the four-storey bars is a sliver of open space that holds exterior walkways.

"This gesture creates a dynamic open space for the residents and brings light and air deeper into the building," LOHA said. 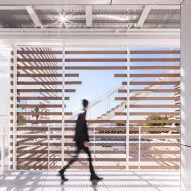 One of the bars is pinched at the middle to make room for a landscaped walkway and plaza, referred to as a paseo. Planter beds are filled with tree saplings and drought-tolerant plants.

On both of the long elevations, which face north and south, the team incorporated stepped terraces that encourage social interaction and enable tenants to enjoy LA's sunny climate. They also break up the massing and help the apartment blocks blend with the area's lower-scale buildings.

The exterior features an interplay of light and dark. Street-facing facades are sheathed in charcoal grey metal while inward-facing walls are snowy white. More than an aesthetic choice, the white walls reflect natural light, helping brighten up walkways and apartments.

Perforated screens allow views into the building and help "animate the street-facing elevations for a more accessible relationship with the surrounding context".

Overall, the development is meant to exemplify how densification can take place in a way that is sensitive to a residential context.

"By incorporating the types of spaces found in the surrounding neighbourhood into a denser building – with intimate green spaces, terraced hillsides and plazas – LOHA's design has allowed the two disparate typologies to coexist."

Founded in 1994, LOHA is led by Irish architect Lorcan O'Herlihy. The Californian firm has completed a number of housing projects in Los Angeles, including a West Hollywood apartment building and a black-and-white housing block in LA's Koreatown.

The firm's MLK1101 project, which was designed for homeless residents, was named housing project of the year in the 2019 Dezeen Awards.