Agricultural barns were an inspiration for this holiday home in Pullenvale, Australia, designed by Paul Uhlmann Architects and featuring glazed gable-ends.

Called The Barn, Paul Uhlmann Architects built the rural getaway for a couple, their children, and their horses, which live in the nearby paddocks.

The two-storey wooden structure is clad with Australian hardwood and topped by an industrial-style corrugated zincalume roof.

"The owners had spent a period living in the USA, [and] initially came to us with the brief to design an 'American barn'," founder Paul Uhlmann told Dezeen.

"We wanted to push the idea of 'the barn' further. The strength of a single form often works well in the Australian bush; as the landscape is usually quite free formed and loose the single form provides a stark contrast to the backdrop."

The focus of the home is the double-height living, kitchen and dining space at its southwestern end.

Sliding wooden screens at either side of the building allow the living area to open to the landscape.

Framed by the exposed timber beams of the barn's structure, a run of kitchen counters sits directly against the glazed gable-end of this space.

This aspect looks out towards the landscape and is protected from glare by the roof's overhang. 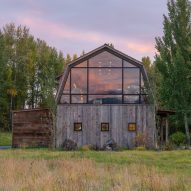 To the northwest, this living space opens onto a terrace sheltered by a hardwood canopy.

Distinctive from a traditional barn is the smooth curve of the roof's apex, which is visible throughout the interiors of the building.

"We also looked to some design precedents, such as Glenn Murcutt, a very influential Australian architect who has reinterpreted regional buildings in the past."

The two-storey section of the home houses games and media rooms as well as a garage on the ground floor and bedrooms and bathrooms above.

Organised as an open run of bunk beds, the children's room is lit by a high-level window in the northeastern gable-end of the building. 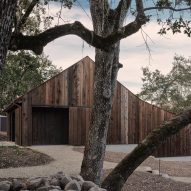 "A generous bunkroom enables the children to host multiple friends over the weekend while the adults can entertain separated on the ground floor," explained the practice.

Skylights in these bedrooms allow those inside to "watch the clouds go past during the day and the stars by night".

Downstairs the wooden structure as been left exposed, with the ceiling painted white.

Many architects draw on agricultural forms such as barns and sheds when designing in rural settings.

In California, Mork-Ulnes Architects clad a Triple Barn residence in weathered steel, and in the Danish countryside Chrisoffersen Welling reinterpreted the area's traditional barns to create a home for a family and their pet falcons.

Photography is by Andy Macpherson Studio.