The co-founder and principal architect of MVDRV discussed his studio's work with Dezeen's founder and editor-in-chief Marcus Fairs.

Maas studied architecture and urban planning at TU Delft before setting up MVRDV in 1993 with Jacob van Rijs and Nathalie de Vries. 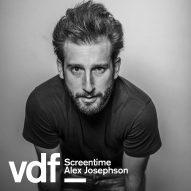 Projects completed by the Rotterdam-based firm are characterised by an experimental architectural style and interdisciplinary approach.

The studio recently announced plans to build a series of stacked terraces at the Shimao ShenKong International Centre in Shenzhen, which Maas describes as an "urban living room".

Previous projects include a mixed-use "vertical village" made up of yellow, blue, red and green towers in New York and a cantilevered, mirror-clad house in Suffolk.

Alongside his work for MVRDV, Maas also holds a teaching position in urbanism and architecture at his alma mater.

In 2008, he founded a research institute called The Why Factor, with which he has authored and publish a number of urban theory books.

Virtual Design Festival is the world's first online design festival, taking place from 15 April to 10 July. For more information, or to be added to the mailing list, contact us at [email protected].