The characteristically gangly doodles of French illustrator Jean Jullien come to life as flat sculptures in Le Jardin des Plantes in Nantes, France, as they playfully navigate the garden's ponds and grounds.

The Nantes-born graphic designer has created four large-scale installations for the botanical gardens, which take the form of oversized, colour-block figures drawn with his signature black line-style.

In one section of the gardens, the rubber-like, elongated arms of three figures interlock as they embrace a copse of trees, while in another area a character with rake-like hands scrapes the earth.

An eight metre-long pink character floats on its back in one of the garden's ponds, taking a bath and spitting water, while an orange figure gleefully walks across the gardens as its long locks made of tangled ivy trail behind it.

Each sculpture has been designed in keeping with Jullien's typically sketchy style, and is made from either flat sheets of bent metal or polyurethane foam that have been coated with bright colours and outlined with black paint.

"The idea is to have several levels of meaning," said the artist, "something which speaks to the onlookers directly but which then also allows them to stop for a little while and appreciate the surroundings".

The four artworks were created as part of France's Le Voyage à Nantes arts festival, which takes place each summer in the city and hosts a series of outdoor art installations and other attractions such as Les Machines de L'ile.

The festival, which is one of the few still taking place this year due to the coronavirus pandemic, will be held a month later than usual, from 8 August to 27 September 2020.

"The nature of Le Voyage, which offers visitors the chance to discover new works of outdoor art through an inspiring walking itinerary through Nantes easily enables visitors to socially distance outside in the open air, whilst enjoying the many artworks and installations that have been commissioned in public spaces throughout the city," said the organisers. 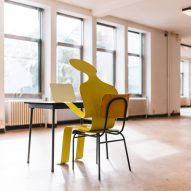 Other arts and design events this summer, including Art Basel and the Design Miami/Basel collectors fair, have been cancelled as a result of the Covid-19 outbreak.

Many festivals, however, have replaced their physical formats with digital ones, including the Maison&Objet interior design fair and Eindhoven's Dutch Design Week.

Jullien's installations are freely accessible, presented outside in the gardens, which are open from 8:30am until 8:00pm. They will be on view throughout the summer.

A similar series of sculptures by the artist were presented at Ghent's Dift Gallery in 2016 for a show titled Flat Out, which responded to the theme of laziness.

Each of the eight large-scale works were made from sheets of bent steel coloured in vibrant hues and shaped to resemble the outline of a person.