Italian studio Carlo Ratti Associati and architect Italo Rota have designed a concept for a tower called Playscraper, which is a temporary structure that consists of eight tennis courts layered on top of each other.

"We liked the idea of creating a temporary structure that could easily be assembled and disassembled, while at the same time creating a new type of public space extending into the sky and unprecedented visual experiences for people in different cities," Carlo Ratti Associati founder Carlo Ratti told Dezeen.

The concept, created for Italian sport and media company RCS Sport, uses a construction technology based on a lightweight, stainless-steel sandwich structure that was developed by the Broad Sustainable Building company (BSB).

"None of this would have been possible without Broad's innovative technology of lightweight metal sandwiches – which we had already studied in detail while curating the Shenzhen Biennale last year," Ratti explained.

Each of the eight boxes in the concept is designed to have a stand-alone tennis court, with the narrow sides of the box featuring transparent walls to give the players views of the surrounding landscape.

The long sides, meanwhile, have electronic facades for streaming the game being played, or other digital content, to onlookers.

The courts in the proposal are stacked vertically using BSB's B-Core slab structure. B-Core slabs are prefabricated and consist of two stainless steel plates held together with an array of extremely thin core tubes.

"I find the technology that is being developed by BROAD in China extremely interesting," Ratti said. "Most people have gotten to know it because of the many popular online videos of skyscrapers built in a handful days."

"What I like about it is that it allows us to construct circular buildings, where everything including the structure can be reassembled or recycled," he added.

While it's just a concept for now, Ratti hopes the Playscraper building might be realised.

"RCS commissioned it to us as a concept to be built and I know that they have been looking at its financial feasibility in detail," he said. "So I think that we stand a good chance to build it." 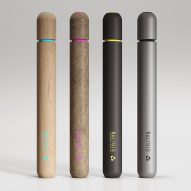 Even if the building isn't ever completed, coming up with these kinds of concepts are a designer's "responsibility", according to Ratti.

"I like the definition of design as an exploration into different futures," Ratti said. "As such, I think that it is our responsibility as designers to constantly introduce new ideas, even if at times they are just speculative."

He also believes that these ideas can stimulate public debate and create healthy feedback loops in society.

"As we recently wrote together with Daan Roosegarde, even fantastical concepts at times become self-fulfilling prophecies – they start circulating, aggregate support and become reality," he said.

The studio also recently unveiled a design for compostable markers to be used with its drawing robot Scribit, and completed MEET, a centre for digital culture in Milan.