Bamboo Grove is a collection of mouth-blown glass vases that can be overturned and filled with flowers at both ends designed by Italian designer Anna Perugini for Ichendorf.

Perugini designed the set of coloured glass vases in a range of heights for German and Italian glassmaking specialist Ichendorf. Each one can be flipped over for a different display depth.

Each vase consists of two sections, one shallower than the other. They can hold flowers or small succulents as well as objects such as tea light candles, depending on their size.

The collection takes cues from the jointed culms, or stems, of bamboo trees which are common to Asia.

"A couple of years ago I went on a solo trip to Japan. During a hike in the mountains, I passed a bamboo grove," said Perugini, whose practice reflects the role of design in everyday life.

"I had never seen one before, and was impressed by the height of the bamboo trees. They looked like really long flower stems," the designer told Dezeen.

The vases were made by lampworking, a traditional glasswork method where a torch is used to heat the glass to a molten state, after which it can be shaped using hand and mouth movements.

Bamboo Grove was formed by heating tubes of glass with a blue flame, then modelling the tubes into vases through mouth-blowing the glass into shape.

"It's a very immediate process. You can see the forms coming out of the tubes straight away. The objects are slightly different each time, as they are not blown inside a mould. It's a sort of freestyle technique, I really love it." 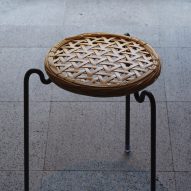 Vegahouse designs stool with removable seat made of woven bamboo

Perugini chose a selection of blue, green, pink and orange colourways which she described as "distinctive Ichendorf colours." These were chosen to contrast with the clear or smoked sides of each vase in the collection.

"When you look at glass you don't look at one colour, you look at an entire gradient of tones, reflections and transparencies," continued Perugini.

The designer wanted to create flexible objects that can cater for many different flower or decorative arrangements.

"I thought about the vases as dynamic and playful objects that become part of the flower composition themselves," she explained.

Anna Perugini is an industrial designer who divides her practice into professional consultancy and self-initiated projects. She is currently studying for a master's degree in Geo-Design at Design Academy Eindhoven under the tuition of design duo Formafantasma.

Other creatives around the world have been expanding the potential of vase design.

Taiwanese studio Yuhsien has made a collection of "flower hoods" which are glass vessels resembling bubbles that are designed to be placed over regular vases. In Copenhagen, Röd Studio and Tableau have collaborated to create steel and wool vases informed by pastry decoration.

Photography is by Foto Studio Internazionale.