Australian studio Jackson Clements Burrows has completed a mass-timber student accommodation scheme at La Trobe University in Melbourne, Victoria, which has been shortlisted in the housing category of Dezeen Awards 2021.

Two sweeping arcs providing accommodation for 642 students hug a central courtyard on the 18,000-square-metre site, which is the first to complete in a new masterplan for the university's eastern residential precinct.

With a total of 4,500 cubic metres of cross-laminated and glue-laminated timber used for its structure, the building is the largest mass-timber project in Victoria, an approach that saw it win out over a competing concrete design.

The local studio aimed to create a design that would mediate between the large scale of the buildings and "finer grain" experiences for residents, with numerous through-routes uniting the buildings with the courtyard and surrounding paths.

"The radial forms negotiate their way around the established gum trees which flank the site boundary and form sculptural clusters," explained the studio.

"While both buildings have respective 'front doors' to the street network, a finer grain of pathways sneak between to reveal the development's inner, more colourful heart."

The typical floor plan of each arc is split into two wings around a central lift and stair core. One wing houses a mixture of studio, four, five and six-bedroom apartments and the other communal spaces, study areas and kitchens.

Circulation areas have been treated as "vertical streets", where the lifts, staircases and theatre-style seating combine to encourage chance encounters and impromptu meeting areas. 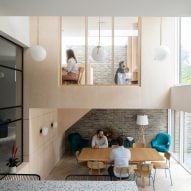 Externally, the building is defined by a series of aluminium panels providing sun-shading. These are finished in grey on the outside of the arcs and shades of green, orange, pink and red on the inside.

These colourful panels, along with the glazed ground-floor areas and external seating spaces, are intended to enliven the routes that lead around the buildings, alongside seating areas in the central courtyard.

"A transparent glazed curtain wall for communal spaces and continuous seating along perimeters create pedestrian scale and encourage students to informally sit, gather and engage with the buildings and broader street context," said the studio.

Much of the wooden structure was left exposed internally. In the communal circulation spaces, it is visible in monumental glulam columns almost 20 metres in height, as well as on staircases and sanded CLT ceiling and wall panels.

Also nominated in the housing category of the 2021 Dezeen Awards is Zozaya Arquitectos's set of curving beach-front apartments.