The next finalist in Dezeen's Redesign the World competition powered by Twinmotion is Gaetano Fornarelli, who has proposed creating car-free cities covered in trees to improve people's health and reduce humanity's impact on the environment.

Fornarelli's Life in Nature project aims to bring the benefits of the countryside to the city.

Cars would be forbidden, with strict city planning ensuring that all essential services are within walking distance for people. Long-distance travel would occur via a public transport system of small electric vehicles either underground or in the air.

This would allow nature to take over the parts of cities that are usually clogged with traffic.

In Fornarelli's vision, some agriculture would be moved within the cities in the form of large urban farms.

Located inside geodesic domes, the farms would be places of social exchange as well as sites of production, which people would use in a similar way to shopping malls today.

"Life in Nature is a proposal for sustainable living. The idea comes from garden cities, enriched with new technological content and today's needs.

"The increase in population and work needs will lead more and more people to move to urban centres, hence the need to move the countryside to the city.

"This development model aims to capture the primary benefits of a countryside environment and an urban environment. 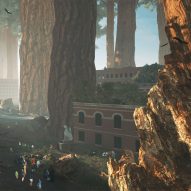 "The large urban farms (the geodesic domes) represent a production space but also a place of social exchange, large squares as an alternative to shopping malls.

"Similarly, in Life in Nature, long-distance travel is reduced to the essential. Cars are forbidden in the city.

"The public transport system is underground, and in the future, it will be implemented by an air taxi system.

"It is possible to move around with small electric vehicles. Buildings are highly technological organisms capable of self-producing energy for the needs of their inhabitants."