A 23-tonne metal staircase rises through a glazed atrium at the centre of Sunderland's City Hall, referencing the region's rich history of industrial craftsmanship.

Completed by local practice FaulknerBrowns, the project is one of the first buildings delivered in the Riverside Sunderland masterplan, which will create 1,000 homes, a school, nurseries, offices and civic buildings across a 32-hectare site in the city.

FaulknerBrowns, which was tasked with combining office spaces that integrated various council departments, public services and private lets with public community areas, described the building as "a truly democratic 'hall for the city'".

"City Hall blends private tenants with Sunderland City Council's services and community outreach. In response, our design brings city and citizens together in a setting that is official yet intimate, grand yet personal," said FaulknerBrowns partner Lee McLaughlin.

"Authenticity and character were our key design drivers, to create a warm and welcoming building tailored to its place and reflective of the council's high aspirations for the city," he added.

The form of City Hall is divided into two halves, united by the full-height glazed atrium where the steel staircase criss-crosses up the building to create a central point of connection.

Locally fabricated by former ship-building firm Beal Architectural, the staircase was informed by Sunderland's history as one of the UK's industrial centres, and is finished with a matt-oxide paint to give it a weathered appearance.

At the base of this stair, a two-metre level change in the site is traversed by a series of wide, wooden steps that connect the front and rear of the building while doubling as a sociable breakout space for all of the hall's tenants.

All of the office spaces have been designed to maximise visual connections and collaborative spaces, with informal workspaces positioned overlooking the atrium and rows of desks at the plan's edges to maximise natural light.

Externally, a white stone-clad colonnade frames the lower levels of the building, while the rest is covered in a grid of aluminium profiles that frame windows, small terraces and a parapet surrounding the roof. 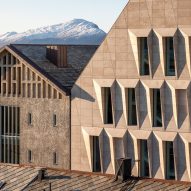 "The building uses rhythmic, civic columns clad in reconstituted stone to create a distinctive presence in the city," said the practice.

"Large, glazed openings promote transparency and create an active ground floor with a strong visual relationship to the public realm," it continued.

Previous projects by FaulknerBrowns include a sports centre in The Hague, the Netherlands, which is wrapped by a ribbon of bright, polished steel that reflects the surrounding park, and a weathering-steel-clad community centre in Hebburn.

The photography is by Hufton + Crow unless stated otherwise.