Glazed voids run up the sides and over the roof of this concrete house by South Korean studio AND, giving each room its own enclosed patio and increasing the flow of light inside (+ slideshow).

In designing Voidwall, AND (Architecture of Novel Differentiation) cut slices out of the concrete structure on all four sides to explore the idea of a house built around terraces – described as balconies – rather than terraces built around a house. 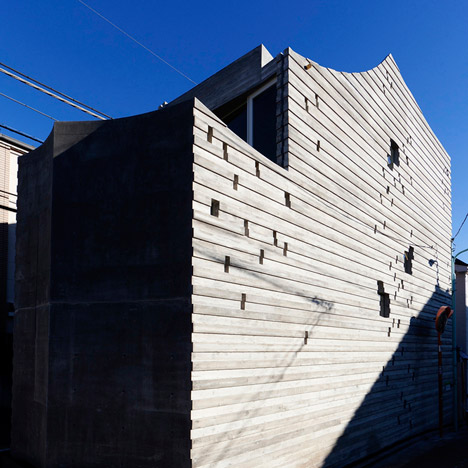 "This project takes a balcony not as a bonus space but as an essential element that constructs a house," said the architects. "As a void wall, it divides the interior space and makes connections between the rooms."

The indoor patios draw light into the centre of the single-storey house, which is located in the coastal city of Sokcho. They offer views between the different rooms in order to make the interior feel bigger than its 136-square-metre footprint.

"Each room has its own balcony, and the house is defined by the characters of the balconies. In this house, the minimal element makes the whole," said the architects.

All the patios are enclosed so they can be used year-round, but feature glazed doors that open up to the garden and terrace around the perimeter.

The architects designed the spaces to suit a range of functions – some act as sunrooms or spaces to grow plants or dry clothes, while others offer more space to accommodate tables and chairs.

"Balconies are an in-between space that connect the interior and exterior, and although they play an important role in experiencing the interior space, balconies have never received full attention in the discourse of architecture," said the architects.

"In most cases, a balcony either disappears as the interior space expands, or becomes a meaningless universal space that serves miscellaneous functions," they added.

A roof terrace offers the occupants an additional outdoor space, and gentle slopes at the edge of the roof guide rainwater down to the garden below.

Rooms are arranged on one floor, with the exception of a double-height volume at the entrance. This houses a bedroom on the upper level and provides access to the roof terrace.

The more private spaces – two bedrooms and bathrooms, a study and a lounge – are arranged around the edge of the building, while the more communal space of the kitchen-diner is located in the centre, acting like a nexus between all the rooms.

White glossy surfaces in the kitchen help reflect light, contrasting with the dark tiles used for flooring throughout the rest of the space.

The balconies also feature materials that contrast with the interior, lined with either timber or irregular-patterned tiles, to help differentiate them as separate spaces.