Due to launch in March, Bezar will give emerging designers around the world a platform to sell their products and also allow established brands to launch new collections.

"We will focus on the designer, their stories and backgrounds, and be a champion of emerging design talent the world over," said Shellhammer, who left Fab – which was valued at $1 billion (£660 million) at its peak – in November 2013. "It's to provide a marketplace and platform for designers and artists."

Shellhammer, who is founder, CEO and chief curator of the new venture, has raised $2.25 million (£1.5 million) from a range of high-profile investors including designer Yves Behar and actress Whoopi Goldberg.

The site will offer designer goods in four categories – graphic art, jewellery, homeware and accessories – for limited periods of time. Initially it will only sell to US customers but will "very quickly" expand its reach to other countries, with products sourced from designers around the world. 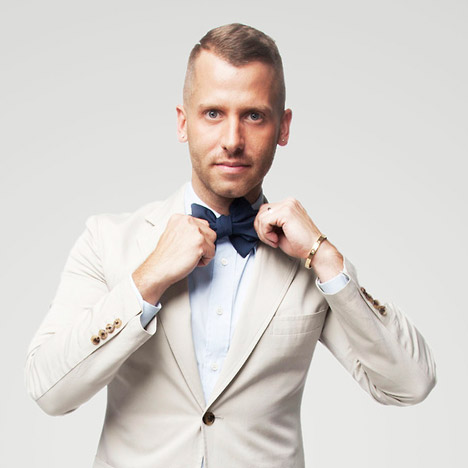 The name Bezar is "a play on the words bizarre and bazaar," said 38-year-old Shellhammer, while the brand's press pack says: "We're bizarre and totally cool with you calling us that".

Its business model will be akin to the flash-sales approach adopted by Fab before it switched to a more traditional retail model, but without the emphasis on clearance sales of unsold stock.

"Bezar's pop-up shops are very different," he said. "They're not focused on discount, but will be curated, timed sales events, where the designs are valuable and the price point will usually not be expensive."

Shellhammer founded Fab with Jason Goldberg in 2010 as a gay networking website, before pivoting the brand in 2011 to a model based on flash sales of designer goods. By June 2013 the fast-growing business had raised $150 million (£100 million) of financing, giving it a valuation of $1 billion with sales in around 30 countries and 600 employees.

But after a series of further changes to its business model, which saw it abandon flash sales in favour first of inventory-based retailing and then sales of its own manufactured goods, its value plummeted and hundreds of staff were laid off. Fab was estimated to be worth just $15 million by the time Shellhammer left the company.

"I have learned a lot from Fab and the experience there," said Shellhammer. "One of the things is that I think we did everything too much too quickly. The idea here is to really be intimate and expose four designers a day."

Fab made a mistake in switching to the inventory model, Shellhammer suggested: "Fab abandoned flash sales. I was a big supporter of it because... it shined a spotlight on [emerging designers], made the world look at them, and put real money in their pockets that let them keep the lights on.

In an interview with Dezeen shortly before leaving the company, Shellhammer admitted that Fab's spectacular growth meant that curation of the product range suffered, damaging the company's reputation.

"For a while, Fab did rely too heavily on kitsch and gimmick," he said, but added: "I have dozens, if not hundreds, of stories of designers whose lives have changed through selling on Fab."

Designers interested in selling their products via Bezar can register by visiting www.bezar.com/partner.

Here's a transcript of the interview with Shellhammer:

Marcus Fairs: Tell us about the new company you're launching.

Bradford Shellhammer: The company is called Bezar, which is a play on the words bizarre and bazaar. It's a phonetic spelling of both. And really the idea is not too foreign from what I've done in the past. It's to provide a marketplace and platform for designers and artists.

It's mostly for emerging designers; people who have figured out some level of production, but cannot play in big-box retail, or don't want to, either because a lot of the big-box retailers knock them off or aren't committed to authenticity, or they can't fulfil the orders in terms of timelines, and costs and pricing.

The other side is to have that go hand in hand with iconic design brands that are launching new products or collaborations. So it will be a launch pad for a more established designers too, to get their stuff out there in a limited-time kind of way.

But the core of the business is going to be committed to being the platform for the emerging designers in four disciplines: art, which is mostly graphic arts, prints and posters; jewellery; and what we're calling house, which is anything in your home. We probably won't be relying too much on furniture, so it'll be textiles, tabletop, decorative objects; things like that.

And then accessories. This is anything from vibrators, bikes and skateboards to backpacks, small leather goods and glasses; things like that. So this is not a fashion play at all.

Marcus Fairs: Is it a flash-sales model or an inventory model?

Bradford Shellhammer: I don't like to say ‘flash', because flash implies that it's products that are sitting around, not being sold and that have to be discounted. It's actually more of an exposure model , but it is flash in terms of limited quantities that are here today, gone in a few days, here and there.

At Fab we focussed on flash events, relying heavily on discount. Bezar's Pop-Up Shops are very different. They're not focussed on discount, but will be curated, timed sales events, where the designs are valuable and the price point will usually not be expensive. We will focus on the designer, their stories and backgrounds, and be a champion of emerging design talent the world over."

Marcus Fairs: What lessons did you learn at Fab that you'll be applying at Bezar?

I learned a lot from Fab and the experience there. One of the things is that I think we did everything too much too quickly. The idea here is to really be intimate and expose four designers a day. So we're going to tell the stories of four designers – one in each of those categories – and really kind of give them a moment to shine. It will never be 36 designers in one day.

I'm a firm believer in flash as a viable business model, where you can actually scale your own business and help other designers and other brands scale their businesses.

Fab abandoned flash sales. I was a big supporter of it because I think it does exactly what it needs to do for the emerging designer. It shined a spotlight on them, made the world look at them, and put real money in their pockets that let them keep the lights on.

So [Bezar] is flash, but it's not. And flash is not a dirty word, y'know? There's all these great, successful flash businesses out there now. There's amazing ones in the US called Huckberry, which is committed to the outdoors men; there's one called The Climb, which is also about outdoor.

Marcus Fairs: So you believe that there's a gap in the offering at the moment? That both designers and customers can benefit from a site like Bezar?

Bradford Shellhammer: Yeah, I mean I walked away from Fab thinking someone else was going to do it. Like, I was emotionally spent and I had dedicated four years of my life to doing this, and I really believed in the actual ethos – the core of what I was doing at Fab. On some level I was hoping someone else would come along and do it. And I just sat back for a year and did really cool things and made a good amount of money, travelled the world, and worked for other brands, and then I realised: no one's doing this. And so the opportunity was still there, and I still get an email every single day. I'm not kidding – every single day –from a designer, whether a Fab vendor, or someone else. It says: 'Can you help me sell my product?'

And so I was like: 'I guess I have to do this'. I feel obligated to do this. It was freeing in one respect because this moment of clarity happened six months ago, where I said: 'Oh! This is the thing I was put on Earth to do!' And then it was this moment of fear where I said: 'Oh. If you f*ck it up again…' – not that we f*cked it up, but – 'If you don't do it the right way this time... this is like your last chance'. So there's this fear and excitement that I'm balancing right now... that I'm running with.

Marcus Fairs: Who are the investors?

Bradford Shellhammer: The lead investor is [venture capital fund] Lerer Hippeau. And that's headed by Ken Lerer, who is the founder of the Huffington Post and he's a media icon in New York City. His son Ben is also part of their investment firm but is the founder and CEO of Thrillist and JackThreads – which is also a very successful flash-sale business for guys. So there's a lot of synergy there.

But some of the other investors are really impressive. Yves Béhar is an investor. So is Mindy Grossman, who is the CEO of [online retailer] HSN; Hiroshi Mikitani who is the founder and CEO of Rakuten, which is the Amazon of Japan and is a multi-billion-dollar company; Chris Burch, who, y'know, is an early investor in Jawbone and Poppin, and who founded [fashion brand] Tory Burch; plus a few other really interesting institutional firms. And an early supporter of mine who is also involved is Whoopi Goldberg, who I know because of Fab.

Marcus Fairs: What are your ambitions? To transform design retail? To make a billion dollars?

Bradford Shellhammer: The ambition personally is to do something where I feel like I'm making a difference in the world. The ambition for the business is to create a meaningful and sustainable business that doesn't have a dollar value attached to it as the end result; that has a core ethical thing attached to it; that creates an alternative for consumers to buy more meaningful and special things. And on the other side, to support small businesses and small designers.

Marcus Fairs: And when this goes live it will be fully international, or start in certain markets?

Bradford Shellhammer: It's going to start in the US only, though the products will be sourced internationally. Very quickly after that we'll be moving to have an international element. And when I say international element, I mean shipping. I do not mean buying companies or setting up offices around the world. But from day one we're committed to sourcing products from all parts of the world.

More from Bradford Shellhammer and Fab