Business news: design e-commerce platform Fab.com has been bought by manufacturing company PCH, which plans to sell unique products alongside the website's existing offering of furniture and accessories. 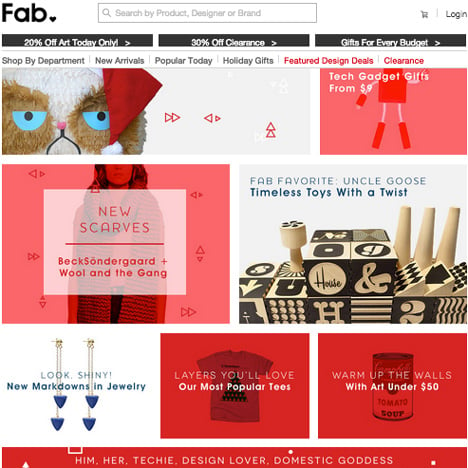 "I believe that PCH is the perfect partner to carry the Fab brand forward," said Goldberg. "PCH is known for its world-class operations, and its deep appreciation for brand, design, and the customer experience. PCH is the perfect home for Fab."

Casey's aim is to work with a range of industrial designers to develop products unique to the site, as well as selling pieces by other brands.

"The ultimate goal for us is about creating the Netflix for the kind of products that we move," Casey told Dezeen in an exclusive interview.

"It's not going to be a discounting site, that's for sure," he added. "It's going to have premium products, with a huge focus on customer service."

From the outset, his company will work with Fab's general manager Renee Wong and her 35-strong team to continue the site's current operations.

Collaborating with a selection of undisclosed industrial designers, PCH will slowly increase the site's offering and says it will put greater focus on the stories behind the products. "We're even considering bringing an industrial designer on as a curator," said Casey.

A refresh of Fab's site is due to roll out later this year, although much of the functionality will remain the same. Casey is also planning to introduce Fab pop-up shops in the near future and is not ruling out the possibility of permanent physical retail stores.

PCH was originally set up in 1996 to source components for computers. Based in Ireland and with US headquarters in San Francisco, the company has since expanded to create custom manufacturing solutions for both startups and larger tech companies like Beats and Apple. PCH reported $1 billion (£651 million) in revenue last year.

PCH's distribution channels allow it to shift around 10 million components a day, and Casey wants to make this system available to brands, designers and design schools – taking their ideas from concept through to distribution.

"We have the ability to track a product right through the manufacturing process to the delivery," said Casey. "We actually understand how to bring these products to market."

Fab has had a turbulent history, starting out as a gay dating platform four years ago then quickly relaunching to sell home decor products via a flash-sales concept.

This model was eventually dropped last year in favour of designing a range of furniture and homeware in-house, to sell alongside the existing inventory.

At the beginning of this year, Fab changed its strategy yet again – ending its relationship with external designers and brands across Europe to instead focus on its own custom-designed furniture.

Its original co-founders are both still working in online retail. Bradford Shellhammer, who left Fab in 2013, announced the launch of his own online marketplace Bezar earlier this year, while Goldberg acquired Finnish brand One Nordic to set up Hem in 2014.

In a statement, Goldberg said he will reinvest all of the funds from the Fab acquisition into Hem.