The Brook collection of ottomans, poufs and stools is made of fabric-covered urethane foam formed into geometric shapes.

The range is named after Issey Miyake's recently opened flagship store on London's Brook Street, where early versions of the seats in blue were first installed last year.

Yoshioka adapted the design for use in the latest boutique for the fashion house, which opened in Tokyo earlier this month.

Taking an extruded hexagon as a starting shape, Yoshioka used a simple 3D-modelling tool to rotate the top surface so its corners are offset from those around the base. Triangular facets connect the shapes on each side.

"The form was invented in the process of playing around with 3D-modelling technology," Yoshioka told Dezeen. "It was created with shapes and lines that happened accidentally during the design process." 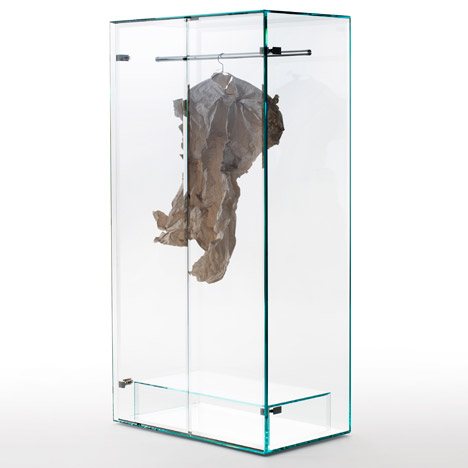 "It is getting difficult to express originality in this world because of the homogenisation caused by technology," he added. "The forms that can be found in accidents always have incredible beauty that is beyond our expectations."

The collection is upholstered in a graduated fabric in pink, green, or brown, selected in collaboration with Italian furniture manufacturer Moroso, which produces the seats.

"The special gradation effect reminds you of the transition of the seasons in Japan," said the designer. "We came to those materials after a series of conversation with Patrizia Moroso in order to realise a beautiful line and comfortableness with ordinariness."

The collection comprises three sizes. The largest is over a metre wide, while the smallest measures just 44 by 39 centimetres, enabling the product to be used as ottomans, poufs or stools.

Moroso presented the Brook range at the Salone del Mobile furniture fair in Milan last week, along with new sofa designs by Ron Arad and a chair with a distinctive X-shaped connector by Richard Hutten.

Yoshioka also launched an entirely glass wardrobe for Glas Italia at the event, which concluded on Sunday.