Studio Swine, Elaine Yan Ling Ng and Tomás Alonso – all based in London – were announced as the 2015 Designers of the Future Award winners during Milan design week in April.

The designers were asked to create exhibition pieces in response to the traditions and aesthetics of products by crystal brand Swarovski, which took over as the sponsor for the annual awards from hospitality chain W Hotels.

They visited the Swarovski headquarters in Wattens, Austria, to research the crystal production techniques and delve into the company's archive, and their resulting projects went on show at the Design Miami/Basel event yesterday.

Azusa Murakami and Alexander Groves of Studio Swine created a story about an entirely crystal planet discovered at the outer edges of the galaxy to base their Terraforming project around.

Tools that the duo designed for explorers of this fictional world include a digital hour glass called the Dune Clock.

A table that creates patterns of sand-like crystals on its surface using sound vibrations represents the planet's shifting surface. The studio's previous space-inspired projects include cabinets and a pair of shoes designed to look like meteorites.

Elaine Yan Ling Ng's Sundew installation comprises a set of interactive jellyfish-shaped forms that change shape to mimic movements of a tiny carnivorous plant as it pulls its tentacles over an insect.

Strands of non-woven textile fused with Swarovski Crystal Fabric react to movement, twisting on their vertical poles into tighter coils.

"After visiting Wattens I now regard crystal as an ingredient for making new materials, textures and surfaces, and for this project it's exciting to be combining craft and technology to explore new functions," said Ng. 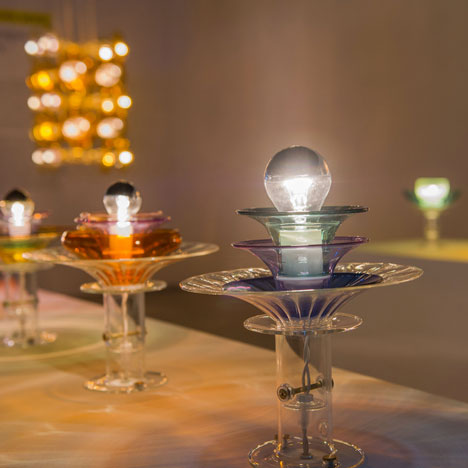 For his commission, Alonso created a range of objects based on the 47-degree cutting angle used to optimise the reflection and refraction of light within crystal.

"These pieces have been designed as exhibition pieces," said Alonso, whose previous projects include a store interior for shoe brand Camper and a set of stackable steel cutlery. "I have looked into the application of colour inside the crystal to create internal and surface effects."

His 47˚ collection includes lights, a mirror and a set of desk accessories, made by combining pieces of cut crystal with coloured UV glues and foils to create different effects across the circular and rectangular items.

Previous winners of the Designers of the Future Award have included Max Lamb, Kram/Weisshaar, Philippe Malouin and Asif Kahn.

Design Miami/Basel runs from 16 to 21 June 2015, with projects on show including Richard Rogers' redesign of a flatpack home originally created by Jean Prouvé and a collection of basalt sculptures that double up as oversized outdoor furniture.