Dutch company Guard from Above has trained the birds of prey to view a drone as a potential meal in response to growing concern about "hostile drones".

Billed as "a low tech solution for a high tech problem" the eagles have already been used in the Netherlands to catch drones of different sizes in mid-air by grabbing the middle of the aircraft.

London's Metropolitan Police (the Met) has now expressed an interest in trialling the eagles in the UK capital, amid growing concerns about drones being used to infiltrate prisons and intercept aeroplanes.

According to British newspaper The Times, a YouTube video of an eagle catching a drone was shown to the Met's chief commissioner Bernard Hogan-Howe, who dispatched a senior officer to determine whether it could work in London.

"As would be expected in an organisation that is transforming we take an interest in all innovative new ideas and will of course be looking at the work of the Dutch police use of eagles," said a Met spokesperson.

According to the BBC, the Ministry of Justice reported nine attempts to use drones to infiltrate prisons in England and Wales in the first five months of 2015.

In December, detective chief inspector Colin Smith – a UK government counter-terrorism advisor – warned that terrorists could use commercially available drones to attack passenger planes in an interview with The Sunday Times.

The UK Air Proximity Board reported the involvement of drones in four serious near misses at UK airports last year.

In February this year, a drone came within 20 metres of colliding with a passenger plane above the Houses of Parliament, but the operator was not identified.

Drones have also been used to fly over otherwise private construction sites, with drone movies of architecture projects like the Foster-designed Apple Campus 2 in California proving popular on YouTube.

However, the idea of using eagles to intercept the unmanned aircrafts has been met with some criticism.

Jemima Parry-Jones, director of the International Centre of Birds of Prey in Gloucestershire, told the BBC she thinks the idea is a "gimmick".

"Eagles are big, powerful birds; they should not be flown in built-up areas," she said. "And secondly in terms of the safety of the bird, you're asking it to grab hold of a drone, which often has four rotating blades keeping it in the air." 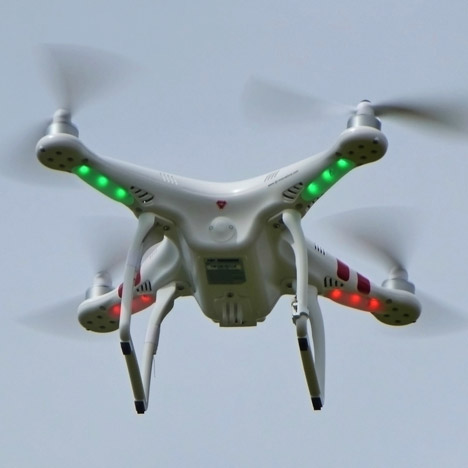 "If the police in the UK are asking the right experts they should listen to our advice," she continued. "If you don't believe us, try putting your own fingers into the propeller of a reasonably sized drone and see what happens."

US conservation organisation the National Audubon Society told the Guardian that the birds were capable of avoiding a drones' rotors.

"They seem to be whacking the drone right in the centre so they don’t get hit – they have incredible visual acuity and they can probably actually see the rotors," said spokesman Geoff LeBaron.

Aside from their reported use in criminal activity, drones are being utilised for everything from Amazon deliveries to medical supply transportation.

Designers have also envisioned other possible future uses for unmanned aerial vehicles, including a fleet of police drones that could patrol London, and to build bridges and other architectural structures.

In 2014 the London Design Festival cancelled an installation of flying drones over fears for "safety of members of the public".