Parts of the mountain landscape extend into this house in southeast China, which was planned by designer Xu Fu-Min to offer its residents a peaceful retreat from city life.

The client grew up in the countryside, but had spent many years living in the city and grown tired of it.

He asked the FMX Interior Design founder for a residence that would allow him to appreciate nature again.

"He had been wishing to own a paradise-like house in a valley far away from the city, where he and his families could enjoy a quiet and leisurely life," explained Xu.

The designer's response, called Returning Hut, is a two-storey property that not only makes use of natural materials, but also allows the natural terrain to extend inside.

The main example of this is in the first-floor master bedroom, where a large rock extends up from the ground to frame a generous bathing area.

Similarly, the walls of the building are made from stone that has been shaped into brick-like blocks. These are left exposed throughout the interior, echoing the texture of the huge rocks the surround the property.

"Built at the foot of the mountain and beside the forest, the hut hides in the valleys, and retains and uses the natural rocks and trees to the greatest degree," said Xu. 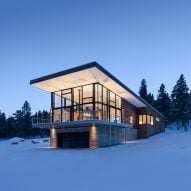 "The design style of the interior space is simple, elegant and natural; it shows respect for nature and gives people a feeling of cutting off from the noisy city and returning back to real tranquility and peace."

The 390-square-metre house is located in Fujian Province, just outside the city of Xiamen. Because of the natural topography, the two storeys of the building both function as ground-floor levels.

The lower level is the smallest of the two floors. It contains two rooms – a secluded home cinema, and a much more open living space that features double-height ceilings and a wall of glazing opening out the garden.

A wooden staircase leads up from the living space to the top floor, which is divided into two wings. The smaller wing contains only the children's bedrooms, while the larger one holds the master suite, a second bedroom and a bar.

Furnishings in all of these spaces are mostly made from wood, while textiles – ranging from sofa upholstery to rugs – are kept simple and predominately muted in tone.

Xu said his approach was to avoid excess decoration.

"It reflects the essence of space and materials, and presents a space where nature coexists with human," he explained.

"Through reasonable functional planning and use of simple lines and structures, and together with adopting simple and natural furniture as decoration in the space, a simple but cozy and warm living space is built."

Xu is based in Xiamen. Other recent projects in the area include a human-body-inspired headquarters for Chinese fashion group Xinhee, designed by architecture studio MAD.

Photography is by Wu Yong-Chang.