The large site north of Beijing was originally occupied by a 200-square-metre European-style home, which has been stripped back to create the simple and geometric form of the Anna Garden House.

"Without fussy eaves, tiles and window edges, the house returns to its original form, showing the appearance of simplicity and honesty."

The H-shaped plan of Anna Garden House features two gabled forms on either side of a ground-floor living area. These open to the garden via large areas of glazing and perforated-brick walls that surround the original porch.

The garden covers an eight-metre height difference and is traversed by a series of large, curved steps that continue into the home, intended to blur the boundary between inside and out.

"In order to create a relaxed living atmosphere, large areas of glass folding doors enclose the existing verandahs on the ground floor, which brings in plenty of sunlight and allows the residents to enjoy nature," said the studio.

"At the same time, the landscaped elements of the curved staircase in the garden are continued in the interior space," it added. 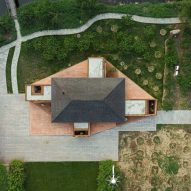 Above, the more private first floor houses the bedrooms and a study, which overlook the garden through smaller, metal-framed windows.

At the centre of the first floor, a secondary living space opens onto a small terrace sheltered by a glass and metal roof structure.

The red brick on Anna Garden House's exterior is continued into the ground floor interiors, teamed with concrete floors and wood-lined columns and furniture.

Two small shelters at the bottom of the garden echo the form and materials of the main home, providing shaded resting spots connected by winding paved paths.

"We wanted to use topography and vegetation to soften the edges of the building and add a wild, natural feeling," said Kiki Archi.

"As a result, there are no distinct planting zones or boundaries in the garden," it continued.

Founded in 2013 by Yoshihiko Seki and Saika Akiyoshi, Kiki Archi is a Japanese architecture studio with offices in Tokyo, Beijing and Shanghai.

Other recently completed houses in China include a brick holiday home in Tangshan by Arch Studio and a dwelling in Bejing that TAOA lined with glass walls and perforated metal screens.

The photography is by Eiichi Kano.