Wonder Architects have used pale green ceramic tiles to clad a house extension in Yangqing, China, that mirrors the form of its traditional neighbours.

Called Intertwine House, the building closely resembles the dimensions and pitched roofs of the village's existing houses, so old and modern architecture sit side by side.

Wonder Architects said they wanted to explore how China's rural areas can respond to urban renewal without erasing their existing architecture.

"The [original] house, built in the 1980s was originally used as a wedding room," said  Wonder Architects.

"Even if it has been ruined, it still exudes the happiness of that time, and accepts long bits of wear and tear over the years."

The new building is a formally distinct volume, built on a former yard space, that links to the existing house both via a "cave-like" internal corridor and an upper-level terrace framed by sloping walls.

Intertwine House's contemporary ceramic finish meets the old brickwork and wooden structure of the original building in lines that run through its walls and roof terrace.

The front door is in open cut in the home's eastern end, which provides a direct route into the central yard.

Access to the extension is through a glazed gable end that sits behind a low section of wall.

Within this new volume, a kitchen and dining area is illuminated by a ground-level strip of windows in the facade and a large skylight. 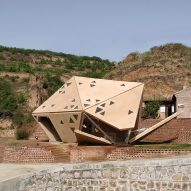 Operable Interactive Village Hut opens and closes depending on the temperature

A small gallery space connects to the original home, which houses bedrooms and bathrooms.

As a further contrast with the wood and brick of the original structure, plain white walls and pale timber floors line the living spaces.

Small sets of stairs that emphasise the changes in level throughout Intertwine House and up to the rood terrace.

Wonder Architects was founded in 2017 by Zhu Qipeng, Wang Chong, and Wang Sidi.

Several architects have worked to restore and extend traditional structures in China.