Brand identity firm Matchstic has worked with Atlanta's Department of City Planning to redesign its branding and create new zoning signs around the city.

Speaking about the department's initial rebrand, Matchstic explained, "We worked with [Tim Keane, Commissioner of City Planning] and his core team to uncover why the department exists and what they hope to accomplish."

"Atlanta's Department of Planning and Community Development has a lot to say to a lot of people, but the messages aren't always clear," it continued. "The challenge was to design a system within the longstanding city brand, including a seal that's been around since the 19th century."

As well as creating a new visual identity, Matchstic were also responsible for "humanising" the language used by the department, so that it could communicate with the public more clearly.

A series of improvements to the customer experience were made, including the creation of a new simplified department name, changing it from "Department of Planning and Community Development" to "Department of City Planning".

Following the successful rebranding, Matchstic were asked to reinvent the department's public notice signs in order to better engage Atlanta's citizen's with the development work happening around the city.

"As the City of Atlanta, everything that we design should be exceptional," said commissioner of city planning Tim Keane. "The city is responsible for setting the standard of work that is representative and worthy of contributing to Atlanta."

"We're in the process of evaluating ourselves to ensure we are clear and concise in all that we do."

Describing the existing signage as "difficult to read and impossible to understand", the studio wanted to improve the legibility of the outdated notices and create a cleaner aesthetic.

"Our solution was to design a clear visual system, one that is unexpectedly engaging and flexible for future expansion," said the studio. "We also created a legible, consistent visual hierarchy that distinctly identifies the notices by assigning each one a single letter."

"The colours were refined to reflect what our flourishing city represents, boldly framing each sign, no matter its backdrop."

As well as the bold colours, the notices have been refreshed and modernised with the department's newly designed logo and typefaces printed in black and white ink.

The crisp new identity chimes with the recent trend for reducing logos and branding down to the bare essentials. 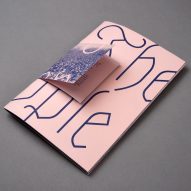 ThoughtMatter redesigns US constitution to "shine a light" on American democracy