Sarah Douglas has replaced Tony Chambers at the helm of British design magazine Wallpaper*, making her the first female editor in the publication's 21-year history.

Douglas, who has been with Wallpaper* for 10 years, has been promoted from creative director to editor, with immediate effect.

She will replace Chambers, who has been editor-in-chief since 2007, and had been creative director for five years prior to that. Chambers will now take on a new role as brand and content director for the magazine, which will involve overseeing new opportunities for partnerships and international growth.

"The Wallpaper* brand has never been stronger and I'm thrilled to be focusing on the future, our global expansion and ensuring we capitalise on that strength," said Chambers, who described Douglas as the "perfect person" for the role.

Wallpaper* is a monthly print magazine that covers architecture, design, fashion, travel and art. The brand's other ventures include the Wallpaper* Design Awards and the Wallpaper* City Guides.

Douglas said she was "proud and truly honoured" to be taking over as editor. She becomes the fourth editor in 21 years, following in the footsteps of Chambers, Jeremy Langmead and Tyler Brûlé, who founded the magazine with Austrian journalist Alexander Geringer in 1996.

A University of Brighton graduate, Douglas was previously art director at the Architects' Journal. She joined Wallpaper* as art editor in 2007, before being made creative director in 2012.

Her appointment coincides with the 21st anniversary of the magazine, marked by its October issue.

"Sarah is exceptionally talented with a wealth of experience and industry contacts and I am delighted that she will be driving the core business forward."

Both Douglas and Chambers begin their roles immediately. 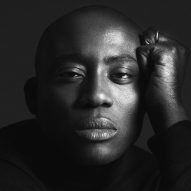