The design was worn by Aquaria, whose real name is Giovanni Palandrani, during an episode that first aired earlier this month as part of the hit VH1 show's 10th season.

It is the first piece of 3D-printed apparel to feature in the history of the contest, which pits drag queens from across the US against each other in a series of competitions until one is crowned the winner.

Freitas Conlin designed the accessory to fit over Aquaria's ears, and cover her cheeks and jaw to seem as if it extends from her bone structure. 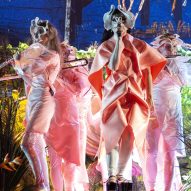 Björk's Utopia tour headpieces made to resemble orchids and bones

Its skeletal appearance was intended to "augment the illusion provided by makeup with physical enhancements, and to reshape the face in a way that blurs the boundaries between masks, prosthetics and jewellery".

The mask was printed in laser-sintered nylon by 3D-printing company Shapeways. The flexible material was chosen because it is lightweight and inexpensive, yet durable enough to be transported from New York to Los Angeles – where the show is filmed.

Although produced all in one piece, the design features interlocking elements that allow hoop-shaped earrings to move independently. It also has fang-like sections that are intended to look "more biological than ornamental".

"I wanted it to be a mask, but to also be part of the makeup and her skull underneath it," Freitas Conlin added. 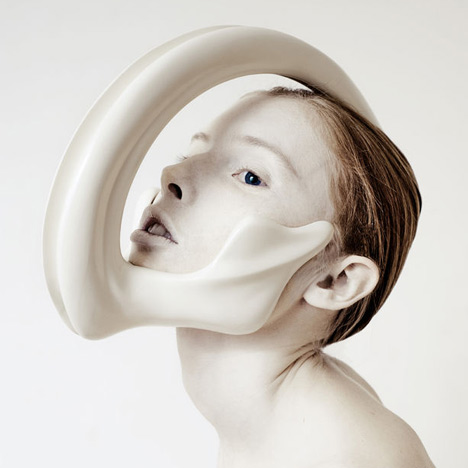 Animal: The Other Side of Evolution by Ana Rajcevic

Time to design and produce the mask was limited to just three weeks, so instead of scanning Aquaria's face, Freitas Conlin altered a model of his own head to fit it around.

Aquaria then wore the piece during a challenge that asked contestants to embody their "evil twin", which she ended up winning.

The Emmy-winning show was created in 2009 by American drag queen RuPaul, who has a longstanding music career and has cameoed in several Hollywood movies.

Since its invention, 3D printing has been used by many designers to created headgear in shapes that would be otherwise difficult to produce in other materials. Examples include a mask created by Neri Oxman for Björk, made up of multiple strands that mimic the underlying structure of the musician's face, and a series that Oxman's Mediated Matter Group at MIT based on traditional death masks.

Photography is by Tanner Abel.