A design for a transparent OLED television that doubles as a shelf by Richard Bone and Jisu Yun has been named the best design in LG Display and Dezeen's contest to create innovative designs that showcase OLED technology.

Bone and Yun beat four other finalists to claim the top prize of €15,000 in Dezeen and LG Display's OLEDs Go! competition with their design called Scroll.

The competition brief asked entrants to create designs that showcase some of OLED technology's key qualities, such as its lightness and thinness, as well as the possibility for OLED displays to be bendable or transparent.

Second place was awarded to Canadian designer Jean-Michel Rochette for Signal, a design for a bendable OLED television that opens and closes like a book.

The remaining three designs shortlisted for the competition shared third place, including a television that unfurls like a flag by Doyeon Shin, a wood shelf with an embedded display by Gianfranco Vasselli and Yunchik Lee and Bomi Kim's design for an OLED display-equipped trolley that can be easily moved from room to room.

Scroll was the "most practical and innovative" entry

Bone and Yun’s Scroll is a multipurpose design that can be used as a digital display when it's turned on and a physical display shelf when turned off.

The slender form of the device, which takes inspiration from an unravelled scroll of paper, is enabled by the thinness and lightness of OLED panels.

Scroll is able to function as a shelf on which to display personal belongings thanks to a curved metal lip beneath the OLED panel.

When not in use, the display turns transparent – a key possibility for OLED panels – so that the device is able to blend seamlessly into the user's home.

A jury comprising Dezeen editors and LG Display executives and designers selected the design as the winner.

"Scroll made good use of the transparency of OLED displays," said Sang-Don Yang, team leader of the TV product planning team at LG Display. 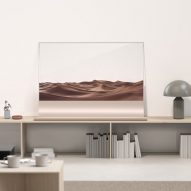 "The jury felt that Scroll was the most practical and innovative design and best demonstrated how OLED displays can blend seamlessly into consumers' lifestyles."

Bone and Yun, who run a Tokyo-based design studio together called Studio Boo Boon, came out on top of over 200 submissions from more than 50 different countries around the world.

The entries were initially narrowed down to a shortlist of 20 designs. From this, the jury selected five finalists and then the overall winner and runner-up.

Each design was assessed on its innovation, aesthetics, functionality and feasibility.

"Winning such a prestigious competition means a lot to us," said Yun.

"This has been a great experience and a wonderful opportunity to develop a product with LG Display’s OLED technology."

OLED stands for organic light-emitting diode. It is a technology used in both lighting and digital displays on products such as smartphones and televisions.

It differs from other lighting technologies like LED because it creates illumination across a surface rather than from a single point. This results in a glare-free, diffused light source that does not require a diffuser or reflector.

As demonstrated by the OLEDs display finalists, OLED technology has the unique benefits of being extremely light and thin. OLED panels can also be flexible or transparent when they are not illuminated.

"All the competition entries were very strong and showed the incredible possibilities that OLED technology holds for the future," said Yang.