Edition Office, Linehouse and Takt Project have been named the best emerging studios of the year at the Dezeen Awards party in London.

They made their selections based on evidence of strong vision and achievement, business success, client satisfaction and positive impact.

The architecture master jury chose Melbourne-based Edition Office as the winning emerging architecture studio for their "rigorous exploration of material and form as a creative direction."

"There's a dichotomy between remaining rigorous and at the same time being experimental," the judges explained.

"Linehouse uses a wide palette of materials and is not afraid of colour," said the interior design master jury, which consisted of Eva Jiricna, Matali Crasset, Ab Rogers, Eero Koivisto and Yoko Choy.

"The studio is interested in context and locality, testing different design methods to create unusual atmospheres," explained the judges.

Judges praised the Japanese design studio, which is led by Satoshi Yoshiizumi, for its "aesthetically and conceptually driven work". 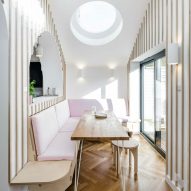 Dezeen readers choose their favourite projects and studios of the year

"Takt Project turns the counter intuitive upside down and make it feel intuitive," they said. "It deconstructs typologies and makes us rethink them in ways that almost seem magical whilst remaining legible and honest."

"The studio is producing work that excites us," the jury explained. "It is inspiring and makes us feel curious about what design can do."

The design master jury commented on the high quality of entrants in the emerging designer category.

"We had a hard time choosing a winner for this category," they said. "This was the most inspiring part of the day and all of the shortlisted designers give us hope for the future."

Each winner was presented with a hand-made trophy designed by Atelier NL. All the category winners were announced earlier this year.