Ángel Verdasco Arquitectos used a lattice of aluminium beams to cover the ceramic tiled facade of an education centre built over an abandoned market in Melilla.

An autonomous Spanish city located on the coast of Africa, bordering Morocco, Melilla's historic market had been operating for some 90 years prior to its closure in 2003.

After winning a 2008 ideas competition, Madrid-based practice Ángel Verdasco Arquitectos were commissioned to regenerate the area.

Recognising its location at the meeting point of the city's Christian, Muslim and Jewish communities, as well as the market's former role, Ángel Verdasco Arquitectos viewed the project as a "social catalyst".

"Architecture is displayed as a tool for multicultural environments and the acceptance of an identity of diversity," said the practice "1,600 students [are] activating the neighbourhood again."

Local materials and patterns were reinterpreted to clad the exteriors of the buildings.

Ceramic tiles sit in a diamond pattern behind the aluminium lattices, which change in density to allow for or restrict views and light depending on orientation.

The market sits between two districts of different heights, so the new complex has been designed as an "urban connector".

At the lower level, a new building sits within the walls of the former market, while two taller structures along its eastern side rise to meet the higher district.

While housing distinct programmes, each structure is linked via a new series of public spaces.

These areas reference the market's original role as a communal space, with open halls acting as meeting spaces between the three schools and the public.

"We worked with both memory and identity. The city is regenerated by keeping the old market and enhancing meeting places through squares and lobbies," said the studio. 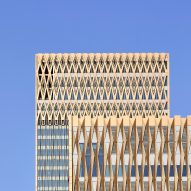 "The market is relocated in the collective imaginary in order to allow citizens to appropriate it."

In the classrooms simple interiors accented with coloured walls place an emphasis on views across the city through large, diamond-shaped windows.

For many cities, the historic role of market halls as buzzing community centres is being adapted or reinterpreted.