Moon-shaped surface tiles modelled on the roofs of traditional Japanese houses are among the five bathroom products that INAX is showcasing at VDF products fair.

Aptly named Crescent Border, the tiles are cut into half-moon shapes that evoke scooped Iraka roofs and form "a laced arrangement that looks like ocean waves" when combined, according to INAX.

The tiles are available with mottled black and white ceramic finishes that are intended to be used either independently or together to create patterns of light and dark.

Crescent Border is now live at the VDF products fair alongside four other new collections by INAX, including the Cerafine Vessel Basin.

Like the tiles, The Cerafine Vessel Basin also takes cues from the brand's Japanese roots, as evidenced by its gentle curves that are modelled on the form of Torii gates.

S600 Line is a freestanding bathtub and one of two products for bathing that INAX is showing at the fair. It incorporates a tap that doubles as a candle tray and has a low silhouette for accessibility.

The second is the Intelligent Control shower system that is operated by buttons on a control panel that doubles as a bathroom shelf, designed as a space-saving solution for smaller bathrooms.

The final product is the minimalist Satis G shower toilet, which is available in black or white with a matte or reflective finish and incorporates an array of automatic functions.

According to INAX, the product is intended to "symbolically express the beauty of light and shadows".

Other brands on show at the VDF products fair include Austrian bike brand Vello, US brand Herman Miller and Danish brands Fritz Hansen. 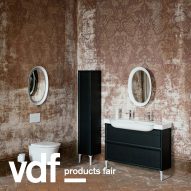