Jonathan Tuckey Design has designed the David Brownlow Theatre for a school in Berkshire that was informed by Renaissance architecture and constructed using cross-laminated timber and red composite cement panels.

The theatre at Horris Hill School in Newbury was designed to host assemblies, drama productions and music recitals.

The studio's concept for the theatre was informed by Renaissance ecclesiastical architecture, and especially the basilicas of the time.

It referenced urban historian M Christine Boyer's analysis of the Renaissance city in her book The City of Collective Memory when creating the building.

"Horris Hill is far from Renaissance Florence, but the reference was used to inform how the theatre was conceived in terms of a civic hierarchy and public building," said associate architect at Jonathan Tuckey Design Rob Leechmere.

"Similarities were drawn from the Basilica in renaissance urban context," he told Dezeen. "These references then seeped into some of the more formal devices used on the theatre."

The 528 square-metre building is comprised of three main spaces, a 160-seat auditorium and performance space, an outdoor amphitheatre and a portico entrance for congregating. It will be used by the boys aged four to 13 who attend the boarding school.

Placed on a slight angle, the structure was designed to replace a 1970s modular cabin. It employs natural materials that allow the design to embrace the site's 85-acre wooded land.

CLT was also chosen as it is a more sustainable construction method compared to using traditional blockwork, creating a saving of 40 tonnes of CO2, the studio said.

The exterior of the building is clad in Viroc, a composite material that is made using wood fibres and cement particles. Vertical panelling and protruding fins made from the material were used to animate its facade. 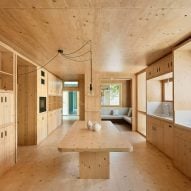 "The design is innovative in its use and articulation of sheet materials and flat surfaces," the studio explained.

"The Viroc was machine cut off-site from sheets to reduce waste, and pieced together by hand as one object of joinery."

A portico structure that doubles as a billboard to announce productions and functions frames the main entrance into the building and sits on a newly designed civic square amongst the collection of school buildings.

"We are very proud to have united the two parts of the school campus with a building for congregating, whether on the amphitheatre steps in the sun or in the auditorium for a concert," studio founder Jonathan Tuckey said.

Inside the theatre, the CLT structure was left exposed and beech battens line the walls, referencing the external facade. Grey acoustic panels are dotted between the beech battens to absorb sound and prevent echoes.

"The wood gives a warmth, calmness and familiarity to the interior space, a counterpoint to the visually energetic articulation of the exterior," Leechmere said.

The undulating ceiling was finished in a deep dark blue to represent the night sky, while the floor is made from black polished Viroc that was cut and placed to echo ornate stone works found in Renaissance churches.

Historical motifs from theatre design, such as the standing stalls of Tudor theatres, the classical theatre proscenium and colonnades also informed the development, which the studio crafted to complement the existing campus buildings.

Other recent projects by London-based Jonathan Tuckey Design include this conversion of multiple gas holders into luxury flats and this update of a London apartment with pink and pistachio interiors.

Photography is by Nick Dearden unless otherwise stated.