Dezeen teamed up with Dassault Systèmes to host a live talk with Waugh Thistleton Architects on the convergence between digital-twin technology and use of mass timber in construction. 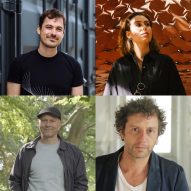 Live panel discussion on architecture, nature and technology by Dezeen and Dassault Systèmes

Haggart, senior associate at Waugh Thistleton Architects, also appeared on the panel to discuss her firm’s pioneering use of cross-laminated timber (CLT), a type of mass timber.

The panellists explored how virtual solutions are able to inform and improve architecture, engineering and construction in the physical realm.

The discussion also focussed on how the emerging concept of digital twins – also known as virtual twins – complements the growing use of mass timber as a material in architecture and construction.

Digital twins are digital representations of physical objects or processes, like buildings, that serve as their real-time virtual counterparts.

In his previous role at American design software company Autodesk, he was part of a team that defined and popularised the term Building Information Modelling (BIM), which refers to the creation and management of information on a construction project across its entire lifecycle.

Jackson holds a bachelors degree in history, a California teaching certificate and an MBA from Sacramento State University, and teaches engineering to school students in Sacremento.

Miller, a licensed architect, joined Dassault Systèmes as an online business consultant in 2019.

Before joining Dassault Systèmes, he was CO Architects' director of digital design and technology.

Dassault Systèmes offers a suite of 3D software for designers, architects and engineers called 3DExperience, which includes well-known CAD products such as Solidworks, as well as virtual reality tools that are used in a wide range of industries.

Dezeen previously collaborated with the brand to create Design for Life, a series of talks and videos highlighting designers who are using technology and research to build a better world.

Haggart is senior associate at Waugh Thistleton Architects, a London practice known for its work with mass timber, including completing the world's largest CLT building in 2017.

In her role at Waugh Thistleton Haggart worked as a project architect on one of the first timber high-rises, London's Murray Grove, which was instrumental in popularising the use of CLT.

Haggart also developed MultiPly, a carbon-neutral timber pavilion for the V&A Museum intended to demonstrate how timber structures can contribute to the circular economy, and masterplanned a sustainable village on a lake for Bergen, Norway.