Called A New Nature, the exhibition features pieces that many may already associate with Noguchi – such as his handcrafted Akari light sculptures – as well as rarer and lesser-known works.

These include Ceiling and Waterfall, two site-specific artworks created by the American artist for the lobby of the 666 Fifth Avenue skyscraper in New York in the mid-1950s, as well as galvanized-steel sculptures from the early 1980s.

"People were not ready for Noguchi's galvanized steel sculptures in the early 1980s when he made them," said Hart, who is senior curator at The Isamu Noguchi Foundation and Garden Museum and worked with White Cube on the exhibition.

"Or for the idea of Noguchi as someone as interested in naturalizing industry as he was in direct carving," he told Dezeen.

While the foundation incorporated these pieces within its own exhibitions for nearly a decade, it was seeing them in a commercial setting that made them realise the time had come to revive them.

"It was only upon seeing two of these galvanized pieces integrated into the interior of The Row's first New York City boutique – which was, and is, a small, perfectly eclectic museum of art and design – that we realized their time had come, that contemporary taste had finally caught up to the cutting edge of their awareness," Hart added. 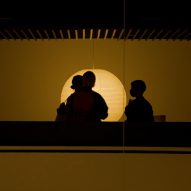 The White Cube exhibition, at the gallery's Bermondsey location in London, is called A New Nature because it focuses on Noguchi's use of industrial materials to create organic environments.

Noguchi was recently also the subject of a large exhibition at the Barbican cultural centre.

Hart believes that part of the reason for this increased interest in his work is because the art world is looking for "figures around which to broaden and remake the infuriatingly narrow canon of postwar art history, which was formed around a small group of white, male, western artists and their concerns."

However, he argues that Noguchi's work has always been relevant.

"Noguchi has the benefit of not needing to be recovered," Hart said. "He's always been here, hiding in plain sight, disrupting not just one of art history's stereotypical tropes, but pretty much all of them at once."

Read on for Hart's pick of five key pieces from the exhibition:

"One of Noguchi's descriptions of sculpture is 'an appreciation of matter in space through which flows a spirit.' What better way to make this fantastic spatial aspiration real than with an Akari cloud you can walk through?

"Noguchi didn't believe in reproductive sculpture, and through the handcraft by which they are still produced, every example of every lantern is truly unique. Like pinecones on a tree, sunflowers in a field, or stars or clouds in the sky, every Akari lantern is a perfect, inexact example of its type."

"Noguchi's late-life galvanized steel series is a virtual retrospective of most of his preoccupations. Mountains Forming speaks to his obsession with physical geology: in this case, the forces that shape the thin crust that is our predominant frame of reference. Mountains are the solid earth equivalent of ripples on the surface of the ocean.

"Noguchi's sculptures often try to create the perspective that comes with a broader understanding of a system – that is his definition of ecology.

"Mountains Forming is not a textbook lesson on the processes of orogeny (the collision of tectonic plates that folds the surface of the earth into mountains) or erosion, which begins to define and tear them down even as they are raised up, but it is a good example of Noguchi's ability to capture a specific aspect of the sublimity of life on Earth."

"Noguchi's knack for sculpting the environment of our awareness was on full display at 666 Fifth Avenue, a seminal mid-century modern office building in Manhattan. He liked actively challenging spaces, and this low-ceilinged hardscape was no exception.

"The waterfall acted as a screen, subsuming the noise of traffic from Fifth Avenue and providing a first layer of visual transport. It was meant to create something like the misty, magical environment around a pool at the base of a cascade in the mountains.

"The 'landscape of clouds', which is how he described the ceiling, then extended the experience upwards, representing another, more complete separation from the urban environment. With the ceiling representing that extraordinary experience one sometimes has in a skyscraper (or more often an airplane or climbing a mountain) of ending up above the cloud layer.

"To step into an elevator at 666, having passed under the ceiling, was to prepare to be conscious of being whisked into the sky. That's Noguchi: the spatialization of a new, modern relationship with nature in the form of a commercial lobby."

Terracing from a maquette for Riverside Drive Playground (1961–65, unrealized)

"One of Noguchi's most basic and powerful play concepts – one he really never got the chance to use – was terracing: triangular and trapezoidal platforms of irregular heights stacked and nested into low-rise landscapes.

"Here, we've adapted an example from a maquette for an unrealized playground to create an environment in which to show sculpture.

"Noguchi's sculptures want to find places in the real world – beyond the 'false horizon of the museum pedestal' – and so here we gave them a synthesized playground, not unlike the surreal landscapes of his contemporaries Yves Tanguy, Arshille Gorky, Wilfredo Lam, and Roberto Matta, to operate in."

"Noguchi considered everything that materially shapes our experience of existence as sculpture. 'Sculpture can be a vital force in our everyday life,' he said, 'if projected into communal usefulness'.

"To that end, he designed many what we call 'body-space devices,' tools for altering our perception of our experience of the world. His sets and props for Martha Graham's ballets are an explicit example of this – along with playgrounds, furniture, and gardens.

"The mirror component of Lady Mirror can be disengaged from the stand and used, making it an interactive entry in the long history of the mirror in art and art as the mirror of nature."

The photography is by Ollie Hammick, courtesy of White Cube, unless otherwise stated.

Isamu Noguchi: A New Nature is at the White Cube in Bermondsey from 4 February to 3 April 2022. See Dezeen Events Guide for an up-to-date list of architecture and design events taking place around the world.