Green tiles and bentwood chairs feature inside this deli and restaurant in central London, which design studio Rawan Muqaddas has renovated to complement its local surroundings.

Situated along an affluent street in Belgravia, Sloane Street Deli incorporates a barista bar, take-away-deli counter and an eatery that serves breakfast, lunch and dinner.

Rawan Muqaddas, founder of eponymous design studio Rawan Muqaddas, aimed to create a comfortable place to dine that captured the spirit of the local neighbourhood.

At the same time, she hoped to inject some of her own Middle Eastern flair into the restaurant to give it a homely atmosphere.

"The concept behind Sloane Street Deli was to build on a classic neighbourhood spot that's also an extension of one's home," Muqaddas told Dezeen.

"A spot where you can come in and spend five minutes or 50, in a space that is inviting, comfortable and warm, with the customer's comfort at heart."

Upon entering the deli customers are greeted by a green-tiled deli counter serving baked goods and fresh pastries.

It is clad in Arcaico tiles, a Japanese tile that Muqaddas wrapped one at a time around the curved counter.

"The focus was on the layering of textures and an earthy colour palette, the centre being the Japanese handmade single tiles," Muqaddas explained.

"As customer journey was key, I introduced the curvature around the counters, followed by the curvature of the banquette to optimise the flow of the customer."

The same tiles can be seen on the spice shelf and the adjacent barista counter where customers can purchase hot drinks. Here, a retro, cream-coloured coffee machine perches on another counter in front of large windows.

Other vintage elements throughout the eatery which is mainly spread over the ground floor level, include cushioned diner-style booth seating, rattan furnishing, bentwood chairs and shiny brass accents.

The kitchen, prep room and restrooms have been renovated in a similar fashion and are all located downstairs in the basement. 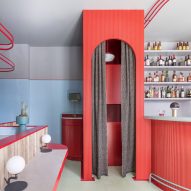 Muqaddas employed a mix of creamy green tones and earthy terracotta – colours that are often associated with Middle Eastern interiors to flesh out the rest of the space.

Elsewhere, splashes of pale pink can be seen on the leather and fabric seats as well as on the awnings that hang outside.

To further tie the deli to the neighbourhood, the studio wanted to preserve as many elements of the original deli as possible, including the facade, interior walls and flooring.

It refurbished some of the existing bistro tables and kept the original white mouldings and marble tabletops.

Rawan Muqaddas is not the only studio to give a modern eatery a retro look. Cafe Banacado, an all-day breakfast cafe in Stockholm by architecture studio ASKA has a colour palette of muted yellows, brown and cream hues.

Photography is by Kensington Leverne.