Designers must think carefully about their motivations for creating solar-powered products, argues solar expert Alex Nathanson in this interview as part of Dezeen's Solar Revolution series.

"There is a role for solar-powered products but we really need designers to avoid greenwashing and waste," Nathanson told Dezeen.

"You have a very small but growing group of designers that are really trying to think through these things, but for the most part it's a PR stunt; some company has a product and they say, 'okay we'll get a lot of press if we do a boutique run of 1,000 units of a solar-powered thing and we'll sell a bunch more whatevers.'"

"For the average person, it's impossible to separate those things," added the New York-based designer, artist, educator and technologist. "That's why I think it's important to elevate the solar sustainable energy designer profession and just make it more rigorous."

He praised Dutch designers Marjan van Aubel and Pauline van Dongen, who recently wrote an opinion piece for Dezeen about solar design, for "thinking about these questions in a very deep way".

"One thing I often talk about when I teach is the different motivations for turning to solar," Nathanson told Dezeen.

For example, he explained, a solar-powered phone charger may be useful in places that frequently experience energy blackouts but are likely to save less carbon than a conventional charger that plugs into a grid powered by solar cells. 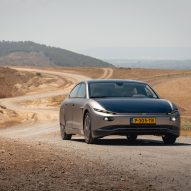 But he pointed to solar-powered cars as an example of an innovation where the practical uses and benefits may be more limited than what the public is led to believe.

"The clearest example of a thing that gets a lot of attention, but I'm not convinced it'll be actually usable, is a solar-powered car," he said.

"Depending on where you live that may be really useful," he continued. "But there's a good chance that if I park on the street, at most there's a 50 per cent chance it'll get sunlight for enough hours a day – it's probably going to be in shade because of buildings and trees and stuff."

"And so then in practice if you're in a city you're likely not going to get enough direct sun to have anything close to a meaningful impact."

Nathanson has been working with solar since 2014. Through his education platform Solar Power for Artists and its partner studio Energy Transition Design he works to make solar more accessible.

He also teaches at the NYU Tandon School of Engineering and recently published a book called A History of Solar Power Art and Design.

Another issue that designers must consider when working with solar is the availability of a skilled workforce to install technologies at the rate required to mitigate climate change, according to Nathanson.

"A big challenge that I think designers almost always ignore, and this is a big focus of my work is who's going to install this? We're talking about a technological shift at a rate that's basically unheard of in human civilization," he said. 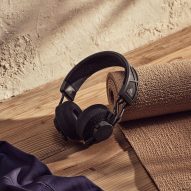 "The internet was a huge technological shift; we went from having no internet to basically everything being connected in 40 years, and that's super fast," he continued. "With the energy transition, we need a larger shift with more hardware, and we need to do it in a shorter amount of time. But that's, I think, an under-considered thing."

However, Nathanson is buoyant about the progress of solar technology and the public's understanding of it.

"I think solar is a really magical technology in a lot of ways and that's part of why I'm drawn to it, because it's creating energy from seemingly nothing," he said. "It's sort of inherently optimistic and that's wonderful."

"I don't need to explain why this work is important anymore; people understand it and that's really exciting."

The photography is courtesy of Alex Nathanson.