Integrated solar panels could help electric cars rival their fossil-fuel counterparts by making them less reliant on charging points and potentially free to run, says Lightyear's Emanuele Cornagliotti in this interview as part of our Solar Revolution series.

"I think most electric vehicles will have a solar roof in the future," he told Dezeen. "It's a topic that all big car manufacturers are working on."

Dutch startup Lightyear recently launched what it calls "the world's first production-ready solar car", the Lightyear 0, which has to be charged like a regular electric vehicle (EV) but is automatically topped up with a five-square-metre solar array covering its roof, hood and tailgate.

That means the average driver in a sunny country like Spain could use the car for up to seven months without needing to plug it in, Lightyear claims.

Vehicles could "basically run for free" on solar

According to Cornagliotti, who is Lightyear's lead solar engineer, cars like this will be "normal within 20 years" once mass production is scaled up and prices are brought down.

In this time, he says their range could increase by up to 50 per cent if the next generation of ultra-efficient tandem solar cells, which use a layer of perovskite to better absorb sunlight, can deliver on their promise.

This could help to address major challenges around the fact that both charging infrastructure and grid capacity are currently failing to keep up with the growth in electric vehicles, Cornagliotti claims.

"If we have a major leap in solar-cell efficiency, then I think vehicle-integrated photovoltaics really becomes a no-brainer," he said.

"You have to pay less, you have to charge less and you're aiding the energy transition because you're not overloading the grid," he continued. "You will always need a plug. But if you don't use your car too much, it will basically run for free."

Lightyear is among a number of startups that are racing to get solar-assisted electric vehicles to the people, including US company Aptera Motors and Munich-based Sono Motors.

But even more household names are betting on vehicle-integrated photovoltaics (VIPV), with Hyundai incorporating a solar roof into the Sonata hybrid, Mercedes-Benz creating a photovoltaic bonnet for its Project Maybach concept car and Tesla reportedly set to offer an optional solar-add on for the Cybertruck.

The hope is that this fledging technology will help to close the efficiency gap between cars running on fuel and those running on electricity. Because currently, driving an EV with a battery capacity of 60 kilowatt-hours is basically equivalent to driving on only six litres of gasoline, Cornagliotti says.

"That's a very small amount of energy," he explained. "For this fundamental reason, an electric car needs to be inherently more efficient than an internal combustion engine car. And solar goes hand-in-hand with high efficiency because the number of kilometres that you can do will be much higher."

The challenge with VIPVs is to integrate them into the vehicle in the most efficient way possible, to maximise the amount of sunlight that can be captured without adding too much weight or bulk that would slow down the car.

For the Lightyear 0, Cornagliotti and his team aimed to achieve this by developing double-curved solar panels, which don't sit on top of the car but effectively replace its regular steel body parts. This preserves the car's aerodynamic shape while increasing  the solar area.

"Traditionally, solar panels are flat and fabricated with a pretty straightforward flat-lamination process," he explained. "But if you create a flat solar roof, you're restricting the area and aerodynamically it won't work very well."

"So developing the manufacturing process for curved panels was one of the key innovations here."

Not much is shared about this trade-secret process, except for the fact that it involves rigid silicon solar cells being cut into small pieces, carefully laminated onto a curved backsheet so as not to break the photovoltaics, and topped with a glass front.

Vehicle-integrated photovoltaics are emblematic of a new stage of solar technology Dezeen is exploring as part of its Solar Revolution series, which is focused on taking photovoltaics out of remote fields and embedding them into our products and buildings so they can meet their own energy demands.

"We need to have as much solar power everywhere as fast as possible," Cornagliotti said. "So it's not about choosing where we put solar panels, but it's about putting them everywhere we can."

"You want to have your solar production as close to the usage point as possible because that means you don't have to use the grid and you prevent the energy losses that happen at every step of the transmission process." 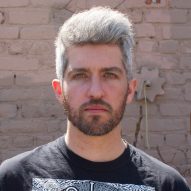 Currently, the Lightyear 0 comes with a lofty price tag of €250,000. But by 2025, the company hopes to make a more widely affordable and accessible model called Lightyear 2, which it aims to retail at only €30,000 despite the fact that costs for raw materials such as polysilicon for solar cells and lithium for EV batteries are currently on the rise.

To achieve this huge price cut, Lightyear will have to adapt and scale up the semi-manual lamination process used to make its curved solar panels for mass production.

It will also have to find more affordable alternatives for the structural backing materials used in its panels, which are costly but necessary to ensure the safety of drivers and pedestrians.

"We see Lightyear 0 as more of a technology demonstrator in the sense that the cost is pretty high," Cornagliotti explained. "But we don't see a fundamental reason why the price cannot scale to a consumer-acceptable level."

"In 10 years, having a solar body part will only be slightly more expensive than just using steel," he added. "And solar-panel cars will be normal within 20 years."

"The clearest example of a thing that gets a lot of attention, but I'm not convinced it'll be actually usable, is a solar-powered car," Nathanson said in a recent interview with Dezeen. "In practice, if you're in a city, you're likely not going to get enough direct sun to have anything close to a meaningful impact."

Even if a rapid scale-up in efficiency and affordability is feasible by 2042, it might not be quick enough to limit global warming to the crucial threshold of 1.5 degrees Celsius set out in the Paris Agreement.

To hit this target and stave off catastrophic and irreversible changes to the climate, all sales of new fossil-fuel cars would need to cease nearly a decade earlier in 2035, according to data by the International Energy Agency.

Embodied carbon of solar panels must be cut

Solar body parts also have a higher embodied carbon footprint than their steel counterparts thanks to the materials that need to be mined and refined to create the photovoltaics and their electronics.

Electric vehicles already generate 30 to 40 per cent more emissions in their production than fossil-fuel vehicles, with estimates suggesting that it takes between six months and five years for them to offset the carbon footprint of their lithium-ion batteries through the savings in operational emissions.

The addition of solar panels on the Lightyear 0 adds five to ten years to this equation, depending on the location where it is charged. But Cornagliotti and his team are currently working on cutting this down to two years.

"In the future, you will have everything connected so the conversion system, the solar system and the high-voltage battery are packaged together," he said. "The carbon cost of adding that would be much lower."

A number of car manufacturers are currently working on eliminating the embodied carbon footprint of electric vehicles. Swedish company Polestar is hoping to develop the "world's first climate-neutral car" by 2030, while BMW recently unveiled a circular concept car designed to be easily disassembled at the end of its life.