As the Consumer Electronics Show in Las Vegas got underway this week, BMW and Toyota revealed futuristic concept cars, a "cute" home robot became a reality and Lego launched a kit for teaching children how to code.

Lego announced a children's kit for building and programming robots, while Californian start-up Mayfield Robotics revealed its domestic robot called Kuri, which responds to its user with facial expressions.

One of the main features of the concept car presented by BMW is the possibility of receiving drone deliveries on the go, while Toyota's vision uses artificial intelligence to anticipate the needs of its driver.

Back in the UK, London's new mayor Sadiq Khan stopped orders for Thomas Heatherwick's Routemaster bus as part of a cost-saving measure to help pay for a four-year freeze on fares.

An email written by Patrik Schumacher to the staff of Zaha Hadid Architects was leaked, revealing frictions in the firm. Schumacher claimed in the email that the open letter sent out in the aftermath of his controversial World Architecture Festival speech should never have been issued.

British architect David Adjaye is to become Sir David Adjaye, after receiving a knighthood for services to architecture in the New Year's Honours 2017.

In the USA, the governor of New York announced a $10 billion overhaul for John F Kennedy International Airport in Queens, which will include a unified interconnected terminal layout.

Architecture firms Skidmore Owings and Merrill and P-A-T-T-E-R-N-S unveiled designs for three residential skyscrapers that will add to the growing Los Angeles skyline.

In Asia, US firm Kohn Pedersen Fox completed a 530-metre skyscraper in Guangzhou, which is now the second tallest building in China and the fifth tallest in the world.

Also this week, Barcelona-based studios MX_SI and Mestres Wåge Arquitectes won a competition to covert a 1930s silo into an art museum and cultural centre in Norway.

Powerhouse Company revealed its plans to convert a brutalist bunker formerly used as a student centre by Eindhoven University of Technology into high-rise housing.

Here at Dezeen, we revealed that 2016 was our best-ever year in terms of visitors, with unique visitors up nearly 11 per cent to over 20 million and visits up 8.5 per cent to almost 50 million.

We also listed our top 10 buildings completing in 2017, as well as the 10 exhibitions we're most looking forward to.

Popular projects included a Swedish brick house based on Adolf Loos' Raumplan concept, a contemporary bungalow for a retired couple and an owl-shaped housing block in South Korea. 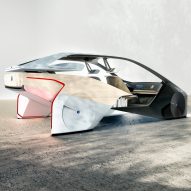 BMW concept car could receive drone deliveries on the move