A series of large-scale architecture and urbanism projects were unveiled for Toronto this week, including a trio of skyscrapers and an entire new smart city, while Frankfurt embarked on a Brexit building boom.

In the Canadian city, Google's parent company Alphabet announced it will build a high-tech "future city" on the edge of Lake Ontario. Along with another waterfront development by Hariri Pontarini and Pinnacle, and 3XN's staggered residential high-rise, the projects are set to transform Toronto and its skyline.

Meanwhile, towers by architects including BIG, UNStudio and Ole Scheeren are among those being built in Frankfurt to woo banks from London, as Brexit uncertainty continues.

Also in city, David Adjaye unveiled a proposal for a spy museum in Midtown, photographs were released of amenity spaces in Zaha Hadid's 520 West 28th condo building in Chelsea, and WeWork opened its first gym in the Financial District.

Over in Chicago, Foster + Partners completed an Apple Store with a Macbook-shaped roof. A museum dedicated to fashion designer Yves Saint Laurent opened in Marrakech, and plans were unveiled for a domed aquarium on a former airport site in Oslo.

In the lead-up to Dezeen's Good Design for a Bad World series of talks at Dutch Design Week, we published roundups of projects that respond to politics, pollution, terrorism, climate change and the refugee crisis.

Our coverage of Design Week Mexico – which took place a week later than planned in the country's earthquake-hit capital – included a pavilion that casts shadow patterns, a set of house-shaped sculptures that punish their occupants, and our pick of designers to watch from the region.

We also hosted and live-streamed panel discussions about the impact of Wedgwood, at the V&A museum in London, and the rise of nomadic living as part of our Dezeen x MINI Living initiative, at A/D/O in New York.

Popular stories this week included an apartment in a converted Antwerp brewery, Stephen Bayley's Opinion piece on the war against branding, and a roundup of buildings that use classic cars to improve their image. 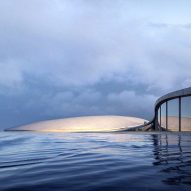