French designers Rowan and Erwan Bouroullec have increased the size of their Samsung television design, so it now comes in three larger options.

Serif 2.0 is an updated iteration of the TV that the Bouroullec brothers first created for Samsung in 2015.

The design has hardly changed, retaining its distinctive I-shaped profile and flat screen, but now features an ambient mode and is available in a trio of sizes options. Serif 2.0 comes in 43-, 49- and 55-inch models, all bigger than the original 40-inch screen.

"The last year we have been working on a second generation for the Serif TV, originally designed for Samsung four years ago," said the Bouroullecs. "Technology is a matter of evolution and this new release was focused on making it more affordable and exploring wider screens."

The TVs now come with ambient mode, which displays artwork on the screen when not in use. Last year, Dezeen and Samsung ran a competition to design a graphic for this feature. A responsive fish mobile by Swift Creatives was announced as the winner. 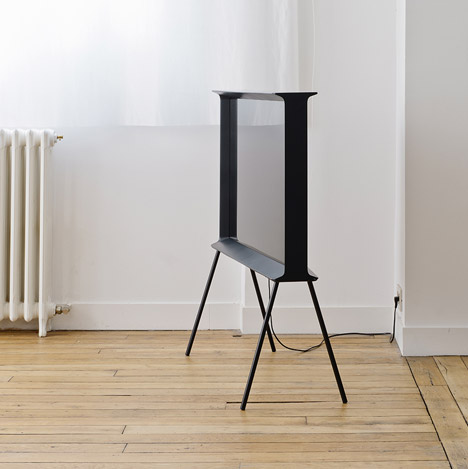 The extended Serif product line was unveiled this week at the Consumer Electronics Show (CES) in Las Vegas, while the first made its debut in an exclusive movie created by Dezeen.

Serif has a box-like frame, with a rectangular shell that protrudes from the television screen's edges, forming its "I" profile. The name comes from the projecting elements on lettering written in certain typefaces.

Among the key elements kept consistent across the set of TVs is the woven fabric panel that slots onto the back of the screen, which covers the connectors and creates a minimal appearance. The two V-shaped rods that can be used to raise and support the television were also retained.

A simple power button is located at the bottom left corner of the screen, complete with a toggle for changing the volume and channel.

The television also features a custom "curtain mode", which was launched with the initial version. This displays geometric patterns on the screen, along with helpful information like the day, date and time.

Samsung's Serif is the Bouroullec brothers' first electronics design. The duo more commonly creates furniture and installations, such as recently launched chairs for Hay and glass pieces for Wonderglass.

Another television unveiled at CES, taking place 8-11 January 2019, is a rollable model by LG Electronics that reduces in size at the click of a button.