Dezeen's Face to Face podcast is now available on our Youtube channel, where you can binge on the full series featuring conversations with Es Devlin, Thomas Heatherwick, David Chipperfield and more.

Listen to the first seven episodes in the playlist above or subscribe on Apple Podcasts, Spotify, and Google Podcasts to download the whole series onto your device.

If six hours of interviews is too much for you to handle, you can also listen to individual episodes below.

Es Devlin: "Every time someone wanted me to write an essay, all I wanted to do was paint a picture"

The first episode of Face to Face featured artist, designer and director Es Devlin who started her career as a theatre designer but became known for her set designs for musicians like Kanye West, Beyoncé and U2.

The interview took place at Devlin's home and studio in south London and covered her seaside upbringing, her maverick student years and her meteoric career.

Thomas Heatherwick: "My studio is a giant version of my bedroom when I was nine years old"

This episode featured British designer Thomas Heatherwick, who is known for projects such as the new London bus and the 2012 Olympic Cauldron, as well as his large scale architectural projects like London's Coal Drop Yards and the ongoing Google Campus in Mountain View, California.

Recorded at his studio in King's Cross, London, Heatherwick discussed his childhood fascination with engineering, his distaste for architectural discourse and how he completed his first building while still a student.

Next up is an interview with Dutch industrial designer Hella Jongerius, who is known for her influential work with colour and textiles and has previously worked with Swiss furniture brand Vitra and Dutch airline KLM.

The interview, which was recorded in Eindhoven during Dutch Design Week, explored how Jongerius grew up on a tomato farm and discovered her creative ability when she took an evening course in carpentry.

David Chipperfield: "I feel like a bit of a fake"

British architect David Chipperfield is one of the world's most celebrated architects and is known for his calm and rational style evident in projects such as the Neues Museum in Berlin and The Hepworth Wakefield in England.

The interview took place at Chipperfield's London office and covered his childhood, growing up on a farm, how he struggled at school, how Zaha Hadid saved him from failing his architecture diploma and why he still suffers from imposter syndrome.

Roksanda Ilinčić: "I think of my clothes as shelter"

Serbian fashion designer Roksanda Ilinčić has become known for her colourful clothes that are worn by celebrities, politicians and royalty.

Recorded in her office, which is located on the floor above Dezeen's office in Hoxton, London, the podcast explored how Iliničić learned about dressmaking by slicing up her mother's designer outfits as a teenager.

Tom Dixon: "As long as you have attitude, you don't have to be talented"

Designer Tom Dixon is one of the few British designers to become a household name, producing furniture, lighting and accessories under his own brand.

The interview took place at his combined office, showroom, shop and restaurant in London and explored how, before he became a designer, a motorcycle crash forced him to abandon a career as a bass guitarist.

John Pawson: "I am irrational and the work stops me going mad"

The final episode of this series of Face to Face features British architectural designer John Pawson. Celebrated for his minimalist approach to architecture and design, Pawson has previously designed projects such as the new Design Museum in London and the Novy Dvur monastery in the Czech Republic.

In the podcast, recorded in his office in King's Cross, London, Pawson recounts his brief spell as a Buddhist monk, how Calvin Klein changed his life and explains how minimalism helps calm his "untidy mind". 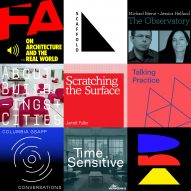 15 of the best architecture and design podcasts to subscribe to

You can listen to Face to Face here on Dezeen or subscribe on podcast platforms such as Apple Podcasts, Spotify, and Google Podcasts.