Dezeen Awards judges including Adam Nathaniel Furman and Arthur Mamou-Mani have described what they're hoping to see from entrants ahead of the 2 June entry deadline.

"I have a feeling it's going to be like a tsunami of amazingness," said Furman, a designer based in London. "I was also planning to allocate quite a lot of time to just let myself sink into all the submissions."

The architect, whose Burning Man temple Galaxia was highly commended in the small building category last year, remembers "writing the description of the entry and talking about what the project meant more than what it was" and "why it was a project that matters."

Mamou-Mani believes that rewarding design that is sustainable and beneficial for the planet will encourage the future generations to "channel their creative energy towards topics that matter".

Furman and Mamou-Mani made the comments during a live conversation as part of a VDF x Dezeen Awards collaboration. Dezeen Awards winners and judges including Sevil Peach, Studio Drift and Talenia Phua Gajardo joined Dezeen's founder and editor-in-chief Marcus Fairs for a special edition of our Screentime series. 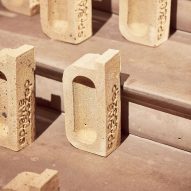 Winning Dezeen Awards was "absolutely fantastic for the team"

"I think it's a validation of one's efforts, maybe talent, and it's a reward of the team's hard work," says Peach. "Our clients like the idea of us winning an award because it becomes a validation for them as well."

"I would have seriously never thought this, it was a super big surprise"

"I was very surprised when we won the designer of the year award, you're just working, working, working and whilst the perception of other people is changing, but you don't really notice that yourself."

"I would have seriously never thought this, it was a super big surprise," said Studio Drift's Lonneke Gordijn.

The Amsterdam-based design studio that won both the designer of the year and lighting design of the year award with their project Franchise Freedom in 2019, explained how meaningful the recognition was whilst it also confirmed a shift in the design community.

"What I liked about winning these awards was that, for me, it felt like a shift, an indication of where design is going," explained co-founder Ralph Nauta. "I would have expected to maybe see a more traditional practice win."

"You cannot just write your entry from your own perspective with words that only make sense to you," said Hayoun. "You really do have to make the effort to unpack everything."

You can enter Dezeen Awards 2020 until Tuesday 2 June, so you still have plenty of time to complete your entry!

If you run into issues or have questions drop us a line at [email protected] or visit our how to enter page for more information.